The technology lab is a laboratory in New New York. In 3013, Bender went there to duplicate folk singer Silicon Red's guitar. [7ACV14]

Using his 3-D printer, Dr Beeler made an exact copy of Red's guitar. However, he left the wireless connection to Bender's folk-song directory open, so everything that Bender sang about was routed straight to Beeler's printer, being then turned into reality.

The printer later created a set of giant octopuses, which attacked Fry, Leela, and Beeler in the lab. Shortly afterwards, a train that it had previously created drove through the wall and ran down a duplicate of Bender.

The technology lab was first seen in a preview clip for 7ACV14, in April 2013. [1] It was also featured in a piece of concept art for the 3-D printer, released by Countdown to Futurama, in May. [2] 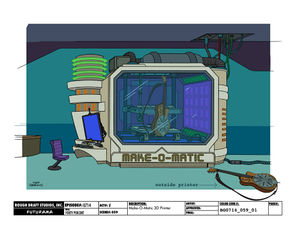