It has a stage for line dancing, which was used by the whole crew, and has a mechanical buggalo, which was ridden by Bender, Fry, the professor, Hermes, and Leela. Whoever manages to ride the buggalo for the longest gets a free steak dinner. It also has a command centre, located somewhere in Texas. When the crew rode, there was a cowboy's skeleton on the chandelier. During Leela's ride, the buggalo malfunctioned, and she was not able to let go, because, due to her squidification, her hand was stuck to the saddle, so the buggalo had to be shot. She rode for 48.3 seconds, winning the prize.

Leela seems to have eaten a bucket of hot wings there.

Tex 1138's was first seen in a preview clip for broadcast season 10, in February 2013. [1] It was also featured in a promotional picture released by Countdown to Futurama, in May. [2] 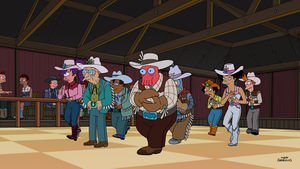 Man: Hoooowee!
Gather 'round, yokel wannabes! This here city slicker's 'bout to get his nuts bolted.

Maurice LaMarche: [referring to the bar's name] I gotta tell ya. That's a nice reference that even I got.
[4]