The Cure for the Common Clod

From The Infosphere, the Futurama Wiki
(Redirected from The Cure For The Common Clod)
Jump to: navigation, search

Fry catches a disease while on a delivery. Leela checks the shipboard medical books and diagnoses Fry with something thought to have been eradicated centuries ago; the common cold. At Planet Express, Fry sneezes over Amy, Leela and Hermes during a medical exam from Zoidberg. The cure for the disease has been forgotten, and because the cold is so contagious Fry is quarantined. The Professor explains why he, Bender and Zoidberg couldn't have been infected. They then watch in disbelief as Leela strips naked and jumps into a tree outside to gather acorns. She has reverted to her primal state due to the mutated cold virus, so has Hermes, who is still his normal bureaucrat self. They realise Amy may be infecting everyone else in the city, so they head to her sorority's lingerie rave. Amy never made it to the party, but had been spotted at the library.

They leave Fry in his bubble at the door and enter via the roof. In her primal state Amy is busy trying to prove Riemann's Hypothesis, the Professor explains that this will take days and that she is contained. Satisfied that the city is safe, they exit via the front door, which sends Fry's bubble rolling into the city's water supply, where it splits open. The next day everyone is acting weird because of the virus. The Professor decides that he should use one of his doomsday devices. The others stop him when Amy returns feeling better after blowing her nose. She and other infected people are hacking up huge germs, these come together through reverse mitosis and form a single gigantic germ. Leela's mutant metabolism creates a germ that is an antibody, but it's too small. They enlist the Sewer Mutants to produce more antibodies, they agree because they believe the infection will be like a party (which it seems to be for them). The antibodies head to the surface and merge, where they destroy the giant germ. A ceremony is held at Citihall to thank the mutants. 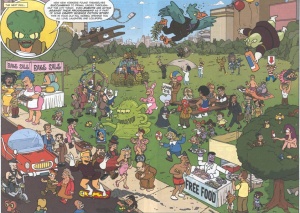 Amy: You're just faking it because you want to weasel out of going to the all night rave my sorority is having at the lingerie warehouse tonight.

Zoidberg: There's something beating in here. I better open you up and get it out of there.

Characters in the Crowd Scene