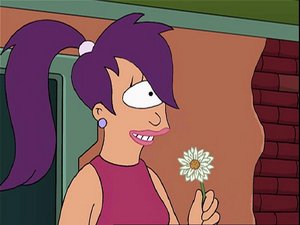 Turanga Leela, possibly "The Other".

"The Other" is a term used by Nibbler when Fry argues that Leela would be person worth saving in the future. Under the table at Applied Cryogenics, Nibbler offhandedly says, "she must be The Other", much to Fry's confusion (4ACV10).

The exact nature of "the Other" remains unexplained, even with the events of the four DVD films and the second run. In the commentary for "The Why of Fry", David X. Cohen implies that the story line with the Nibblonians goes beyond what we've already seen.

Other solutions draw similarities to Star Wars Episode V: The Empire Strikes Back, where Yoda mentions "there is another", when Luke Skywalker takes off against Obi-Wan's and Yoda's wishes. While the purpose of this other person was never revealed during the original trilogy of Star Wars, it was always assumed to be Leia Organa Solo. Some would argue that the whole purpose of the this "there is another", is a way to hint at the fact that Luke and Leia are siblings.

The writers may specifically have picked this issue, since it was not finalized in Star Wars as a topic never to be finished off in Futurama canon. Though, it is naïve to assume the writers are hinting that Fry and Leela are related, which would only make the Fry-Leela relationship all the more complicated.

One possibility may have something to do with the events of the second-run finale, "Meanwhile".