Venusian Blobs are a species of jellyfish-like aliens from Venus who have settled on Earth and what appears to be the artificial rings of their planet, and are easily angered. An unknown Blob apears on the Earthican $20 bill.

The first example of their existence is the words Venusians Go Home plastered around the city in AL1. Venusians seem to use AL2, as a van is see with the words A Venusian Corporation written on it in AL2.

The identity of the species is only hinted at in the series via the painting Venus de Venus that Bender showed the Planet Express ship. It clearly shows a female of the Blob species, so we could deduce that the Blobs are in fact Venusians, much like Humans are usually Earthicans. However they are explicitly referred to as Venusian Blobs in Game of Drones 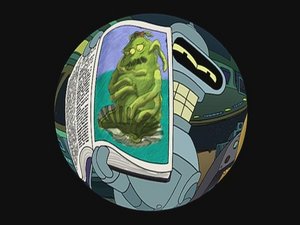