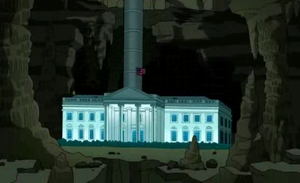 The White House is the official residence of the President of Earth. It was first seen at the Monument Beach as one of the monuments, but it was later destroyed by the Omicronians when they first invaded Earth. Later, it's only in Washington D.C..

There is also a a second White House underneath the known one, although it's real purpose is unknown; it may be the actual White House where the President lives, the ordinary White House just being a fake in order to assure the President's security. It is also possible that the Secret White House is meant for extra secret meetings such as the one concerning V-GINY.