Difference between revisions of "Fear of a Bot Planet"

"Fear of a Bot Planet" is the fifth episode of Futurama and of the first season. It aired 20 April, 1999 on FOX. The Planet Express crew is sent to Chapek 9, a planet filled with human hating robots, Bender immediately likes the place, being tired of his friends opinion of him as nothing more than an item.

Act I: "From up here, the entire world can seem insignificant."

Fry and Leela are in the cockpit of the Planet Express Ship, admiring the view. They're gazing out at a green, ringed planet, which then splatters on their windshield.

Act II: "You humans are so scared of a little robot competition!"

Fry, Leela, Farnsworth, Bender, and Zoidberg are at a Blernsball game. Fry is confused about the game rules, such as the ball attached to a thread. They start talking about great players, and Bender brings up Wireless Joe Jackson from the Robot leagues. They argue about whether it's right to exclude literal Blern-hitting machines from the human league. Hermes calls them back to the office for a mission to Chapek 9, "a world where humans are killed on sight." Bender tries to get out of work claiming a Robot holiday, Robanukah. Bender, being asked to actually do something for the first time since working at Planet Express, cries discrimination. They make him go anyway, and he is captured by the native robots. 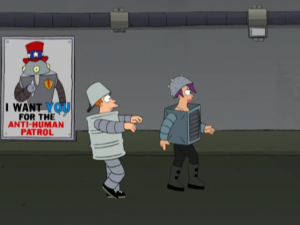 Fry and Leela disguise themselves as robots and venture onto the planet to try and rescue Bender. Fry blows their cover, and they run and hide in a movie theatre. The movie, It Came from Planet Earth, is a cheesy horror film about a human who breathes fire and eats robots. When the robots gather for their daily human hunt, they finally locate Bender - declaring his intention to destroy all humans! 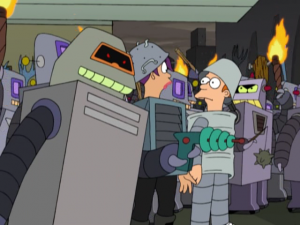 Fry and Leela in the movie

Act IV: "Got you, you murderous flesh piles!"

On the human hunt, Leela and Fry talk to Bender. Bender tells them he wants to stay, but that they should leave. When they are all three caught, Bender pretends he was capturing them. They are tried for the crime of being human. The computer judge sentenced them to perform tedious calculations and spot-weld automobiles. When convicted, they are taken before the council of robot elders and they decide Fry and Leela must be killed. The elders try to get Bender to kill them himself. He refuses, and they then turn on all of them. In an unusual display of cunning, Fry helps them escape by scaring the elders, threatening to breathe fire on them. When in the ship, the robots try to capture them by climbing onto each others shoulders and Fry throws them the package. It turns out to be a box of desperately-needed lug nuts, and the robots cheer and break off their pursuit. Back on the ship, they all celebrate Robanukah, which Bender admits is made-up.

Bender: Oh, so just because a robot wants to kill humans that makes him a 'Radical?'

Mayor-Bot: Your honor, I intend to demonstrate beyond 0.5% of a doubt that these humans before us are guilty of the crime of being humans. Come to think of it, I rest my case.

Bender: Admit it, you all think robots are just machines built by humans to make their lives easier.
Fry: Well, aren't they?
Bender: I've never made anyone's life easier, and you know it.

Billboard at Chapek 9: "GOT MILK? THEN YOU'RE A HUMAN AND MUST BE KILLED" 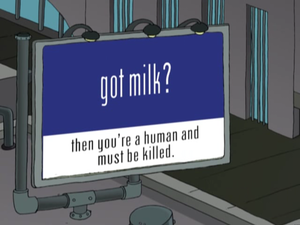 Fry: Is the puppy mechanical in any way?
Guard-bot: No! It is the bad kind of puppy!