Zoidberg using his ink defense in "Lethal Inspection".
This article or section is a stub. You can help by expanding it.

The ink defense is a Decapodian feature used to flee enemies, and is immediately triggered when a member of the species is frightened or attacked, or for that matter on command. 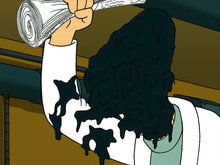 Professor Farnsworth after Zoidberg sprayed ink all over him in "The Cyber House Rules".

Zoidberg used his ink pouch for non-defense purposes as well, when he was writing a letter to his Uncle Zoid, he wanted the letter to be personal, so he wrote it using his own ink. (3ACV08)

When Leela decided to get surgery to give her two eyes, Zoidberg suggested that she gets an ink pouch to help her escape her enemies. Farnsworth said that was a stupid idea, calling Zoidberg an imbecile, he prepared to hit Zoidberg with his rolled-up newspaper, but Zoidberg sprayed ink at his face and ran off, wooping. Zoidberg later sprayed ink on Leela while she was having dinner with Adlai Atkins. (3ACV09)

Zoidberg: Wonderful. And while you're under the knife, you could also get an ink pouch to help you escape your enemies.

Farnsworth: That's the stupidest idea I've ever heard, you imbecile!

[He raises a rolled-up newspaper at Zoidberg. Zoidberg sprays ink at his face and runs off, wooping.]