Difference between revisions of "Lord Nibbler"

Lord Nibbler is a member of a proud and ancient race, the Nibblonians. Born 274 BC, he is old and wise, and with a high status in the Nibblonian world, yet he prefers to be Turanga Leela's pet, and a member of the Planet Express crew. 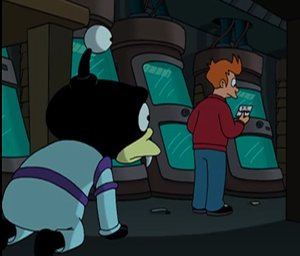 Nibbler hides before pushing Fry into the tube at Applied Cryogenics (4ACV10). 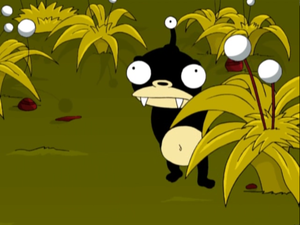 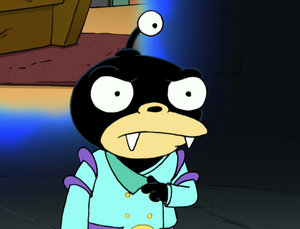 Lord Nibbler hid his intelligence until the day the Earth stood stupid, when he told Leela the truth about his orgins. This eventually helped Fry defeat the Brain Spawn, an enemy to the Nibblonians. After this, he erased Leela's memory in order to keep everything in secret. While Fry's memories were not erased, no-one believed his story, and with time he forgot it. Later, Nibbler got Fry into the game, as he led him through time to destroy the Infosphere. He then deleted Fry's memory as well, so that he could fulfil his purpose undetected.

Revealed to the Crew 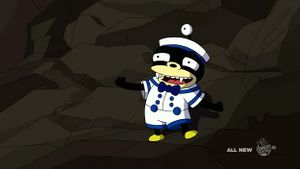 Nibbler in his naval uniform (6ACV08).

As Nibbler remarks in "The Day the Earth Stood Stupid", his true name is not really Nibbler - that was just the name that Leela gave him when first finding him (1ACV04). The other Nibblonians uses this name as well, however, when speaking in English, because his true name would take too long to pronounce properly, or so he claims. 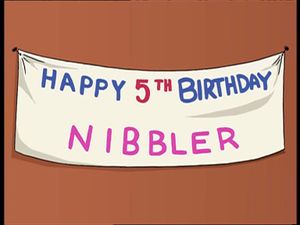 While on the surface pretending to be a cuddly pet - long even disguising his intelligence entirely - Nibbler is highly intelligent and sophisticated. He enjoys being Leela's "schnuchoms", but sometimes long for intelligent conversation and approval in the human world.

Nibbler: We must remove the time-tattoo as quickly and painlessly as possible!
[Cut to Fry's apartment. Fry is on the sofa screaming in agony while the Professor, Bender and Bubblegum hold him down. Leela and Lars keep watch at the door. They see the Scammer Aliens approaching.]
Lars: Quick, they're coming!
[Nibbler finishes lasering the tattoo off Fry's butt.]
Nibbler: The tatoo is gone. I saved the space-time continuum and 40% of your rectum.
[Everyone cheers.]
Bubblegum: That's all you need!