The machine language time code, or simply the time code, is a code appearing in a tattoo on Fry's butt, that causes release of the Time Sphere from the Galactic Entity (BBS).

The code appearing in the film is as follows.

It is interesting to note that it has yet to be truly explained where the time code comes from or how it ended up on Fry's butt in the first place. The code was put on the frozen Fry's butt by Bender, using a flap of skin from Lars, but it only existed on Lars' butt because he is a paradox time copy of Fry. This is an example of the bootstrap paradox. However, in the original draft of the script, Bender, while waiting for Fry to come back from the future (this being Bender 2, who gets kicked into the freezer tube), watches the lottery and writes down the winning numbers, converts them to binary and mirrors them, then inscribes them on Fry's butt, hiding them from Bender 1 and planning to return and win the lottery (unaware that he is doomed as a time paradox duplicate). 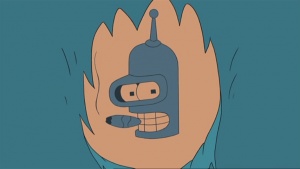 Hidden in a smelly mirror