Difference between revisions of "Maple Craters"

The Maple Craters is an exclusive suburban housing area on asteroids somewhere inside the solar system. The Maple Craters' slogan is "An Exclusive Field of Planetary Debris".

Maple Craters seems close to Earth, as children living there go to school on Earth, and Earthican kids deliver newspapers to these houses, such as Dwight Conrad's and Cubert Farnsworth's Awesome Express.

Inhabitants include Horrible Gelatinous Blob, his wife, his son, Brett Blob and The Little Prince, among others. 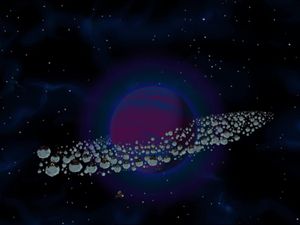 The planet with the rings