"My Three Suns" is the seventh episode of Futurama and of the first season. It aired 4 May, 1999. Fry becomes the emperor of Trisol through random lucky occurrences, at the expense of Leela's displeasure with Fry's reckless behaviour. This episode also establishes Bender's dreams of becoming a chef.

Bender goes through an automatic robot wash, much like a typical car wash, while dancing and singing a modified version of the song "Going Through the Car Wash." After he gets out, however, it starts to rain.

Fry and Leela catch Bender watching Elzar's cooking show on the TV at Planet Express. He admits he wants to become a chef Hermes tells him he noted that they're paying him to do nothing but loaf about on the couch and has to start doing something or he's fired, so Bender decides to be the cook of the ship. He takes Fry and Leela down to Little Neptune to buy ingredients for his first meal. Fry is distracted by a "organ seller" and wants to buy some gills but need to give the seller his own lungs. When he's about cutting Fry, Leela kicks the seller and they get out of there. When they get back, the professor sends them on a mission to the planet Trisol in the Forbidden Zone, deep in the heart of the Galaxy of Terror. On the way Bender prepares a full of salt meal, which the crew finds inedible. When they arrive, Fry drinks a strange bottle of blue water - which turns out to be an Emperor.

Having accidentally assassinated the Emperor, the Trisolians make Fry their new Emperor. Fry appoints Bender as his Prime Minister, and refuses to leave despite Leela's warnings. During his coronation, the former emperor begins to glow and speak from Fry's stomach. The Trisolians attack Fry, intending to cut him apart to free the Emperor. He flees with his friends, and they lock themselves in the Emperor's chambers. 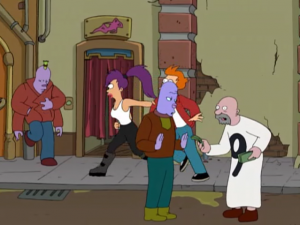 Fry: That's the saltiest thing I've ever tasted. And I once ate a big, heaping bowl of salt!

Amy: Bender, is this salt-water?
Bender: It's salt with water in it, if that's what you mean.

Bender: There was nothing wrong with that food, I used 10% less than a lethal dose.
Dr. Zoidberg: Uh oh, I shouldn't have had seconds.