For other uses, see Farnsworth.

Professor Hubert J. Farnsworth is an aged, eccentric inventor, founder and owner of Planet Express and an honorary Globetrotter. He is crotchety, absent-minded and sometimes brilliant. In 2999 he was the last known relative of Philip J. Fry, later, Professor Farnsworth discovered that he had fathered a son, as well as the clone that he had kept hidden. In addition, he also serves as a tenured professor at Mars University teaching the Mathematics of Quantum Neutrino Fields. Farnsworth is an inventor of both useful and impractical things, some of which are extremely dangerous devices such as his Doomsday devices.

Personality wise, he varies from callous disregard to sentimental affection. He has no objection to sending his crew to missions which may eventually mean death to his crew, and has sent previous crews to their deaths before. Farnsworth is the oldest living member of the Academy of Inventors, where he often competes with his arch nemesis, Dr. Ogden Wernstrom.

Farnsworth is a mad scientist, though how extreme this tendency is varies depending on how writers feel best suits the episode. Farnsworth's name comes from Philo Farnsworth, who invented the television. In addition, his first name, Hubert, may come from Ken Keeler's former professor, Hubert Dreyfus. The only thing his name has in common with the name of Philip J. Fry is the unsettled "J." as their middle initial, but this may just be a common joke Matt Groening sets for his characters.

Farnsworth also enjoys public nudity, and may have been convicted. His urge to undress becomes much greater around Xmas. 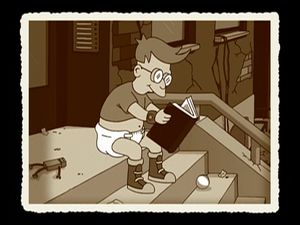 Hubert J. Farnsworth was born on 9 April, 2841 – although claimed until 3001 that it was actually 2851 – in the nerdiest slum of New New York, Hell's Laboratory. At age 8, he learnt to read, albeit while still in diapers.

Hubert enjoyed his teenage age as a nerd with an affection for role-playing games. After 14 years of graduate school, Farnsworth became a scientist and designed such things as fast cars, trendy night spots and beautiful women, all out of his one-room apartment. Evidence suggests that he may also have been a hippie and a disco boy. Possibly during graduate school.

By 2900 Farnworth had taken a teaching position at Mars University where his most promising student was an up and coming young science undergrad named Ogden Wernstrom. Sadly, the two had a falling out over a pop-quiz score which lead to Wernstrom's hundred year quest for revenge. While retaining a role at the university, Hubert was eventually hired at Mom's Friendly Robot Company, staying there for the next fifty years. During this time his inventiveness lead to the creation of many new products and breakthrough technologies, such as the use of Dark Matter as fuel, the first robot capable of qualifying for a boat loan and a sport-utility robot, the design of which would become the basis of all robots running in the early 31st century. It was during this time he also began an on-again, off-again relationship with Mom, the owner of the company, who was having a similar relationship with Wernstrom. By the end of this period, Mom had fallen pregnant with their child, a secret she would keep from him for many years.

After numerous tries with Mom, and with a need for money to fund his research, he founded Planet Express, an interstellar delivery company. Early on, he hired his oldest friend, Dr. John A. Zoidberg as the company's staff doctor. In addition, he hired Hermes Conrad as the company's bureaucrat. In around 2999, Amy Wong entered the company as an engineering intern, but has since remained in the company for several years.

Farnsworth has had numerous crews, who he enjoys sending to their doom. As a result many have died horribly or gone missing. Shortly after one such instance, late on the 31st of December 2999, he learned that he was not the last surviving member of his family. His long lost and far removed uncle, Philip J. Fry, had just been defrosted. Fry, Turanga Leela and Bender Bending Rodríguez were hired early the next morning and have been his longest surviving crew, who despite 10 years in the company remain alive.

Farnsworth doesn't always just send his crew on simple delivery missions, but has sent them on charity missions as well as highly controversial missions. Even when his crew and company is unrelated or unsuited to the task, he isn't shy to send them along anyway. 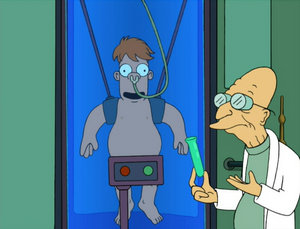 As a member of the Academy of Inventors, the Professor has created many things. Often these don't live up to his expectations and are ridiculed by his fellow inventors. Occasionally, however, they can help save the day; the Smell-O-Scope for instance was laughed at by colleagues and Wernstrom had his revenge by giving it a poor grade, shortly afterward it detected a giant ball of garbage in space that was on a collision course with New New York. After the Planet Express crew averted the crisis, Wernstrom once more announced a thirst for revenge.

After his 150th birthday party, Hubert realised that he had no one to continue his work when he is gone. After days hidden in the lab, he emerged announcing that the clone he'd been growing the past twelve years would be his heir. Unfortunately, Cubert did not want to follow in his footsteps. Farnsworth finally decided that his life was over, and revealed his actual age, 160, the age at which Sunset Squad Robots would come and take him away to the Near Death Star. Soon after a rescue by his crew, Cubert finally decided to carry on with Farnsworth's research.

After a brief reunion with Mom on Mother's Day of the previous year, 3002 saw Farnsworth's company taken over twice. On the first occasion, Cubert and Hermes' son Dwight expanded their paper route to consume Planet Express. Soon after this takeover, Awesome Express fell apart due to poor management. On the second occasion, a shareholder meeting resulted in a mysterious stranger taking over as CEO from Farnsworth. Castle's running of the company was more successful, despite no deliveries being made during this time. Inevitably the company dropped back to it's original poor stock price after the new CEO's death and Farnsworth's reinstatement.

When a heatwave hits and the usual method to counteract global warming fail, the Professor is forced to admit that all modern robots are descended from his designs, which produce lots of pollution. The scientists at the conference plan to destroy the robots is soon thwarted and Hubert received a medal for saving the planet and its robots. About a week later after his staff decided that he had become too old, they took him to The Bubbling Geezer a visit that resulted in everyone becoming younger. The eventual resolution of this situation took them to the Fountain of Aging, where the waters made him "even older" than he had been. 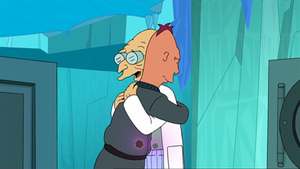 Over the years, Farnsworth's feud with Wernstrom continued to grow, and when an anomaly forms a short distance from the Earth the pair compete in Deathball to decide who will investigate. After Farnsworth's investigation proved unsuccessful the pair found themselves united for the first time since the pop quiz as the collaborated in research together, protested and shared a prison cell. But their new found friendship fell apart once more following an inter-universe relationship with Yivo.

When Mom faked a dark matter shortage in 3008 in order to increase the price of dark matter worldwide, Farnsworth finally told the tale of how he discovered it, and decided to end it all, so that scientist could spend their time on developing cleaner fuels, such as Whale Oil. Farnsworth managed to enter Mom's dark matter mine on Alaska, which turned out to be a Nibblonian farm, where Mom had kept Nibblonians imprisoned for years to produce dark matter. However, with the help of his crew and his long lost son Igner, Farnsworth managed to bring the crystals close enough together to render dark matter useless. After converting to whale oil and receiving a few bribes for scientific endorsements, he joined the rest of the crew on a journey into a wormhole.

Farnsworth has at least on 3 accounts went back with his major love, Mom. At around age 90, he worked for Mom's Friendly Robot Company, where he designed robots for the company as well as toys, such as Q. T. McWhiskers, but Mom's suggestion of turning the toy into a giant, made Farnsworth leave her, because she simply understood him.

He would later return to Mom's company to work on creating actual robots, but back then, robots were stiff moving and not very efficient, however, when he sacrificed fuel efficiency, he succeeded, unfortunately, this robot design also caused global warming. Why he left Mom this time remains unsettled, but it may be because he once realised she was evil.

On a third occasion, Farnsworth was once again at the company with Mom, where he discovered the secret of Dark Matter, around the time where Mom's sons were born. But when he found out she had left him for Dr. Ogden Wernstrom, he left once again.

While his relationship with Mom has certainly be his largest, it has not been his only one, during a brief period of regaining the appearance of youth using stem cells from GeneWorks, S.K.G., he found a girl willing to date him, although she also turned out to have used her tax rebate for a crazy treatment. There was also a breif fling with Hattie while they were on the Titanic.

The professor, being a vivid inventor, has created numerous inventions, ranging from very sophisticated to down right crazy.

Here is a list of the Professor's inventions (in alphabetical order) 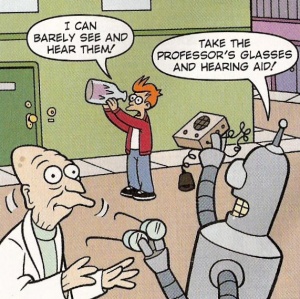 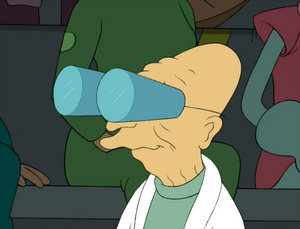 Originally, the professor's catchphrase was going to be "...though I am already in my pajamas." This was only used in the first and second episodes.
The professor's basic catchphrase is "Good news, everyone!" The phrase is used so frequently that it was already possible to joke about it in the seventh episode.

When he spoken to or asked a question, he also commonly says "Eh-wha?" This is used often to emphasize his senility and hearing loss.

The final "catchphrase" used by the Professor is "Oh My..."

While Professor Farnsworth appears in most episodes, films and comics, with the exception of "The Why of Fry" and "Where No Fan Has Gone Before", these categories may be of interest: