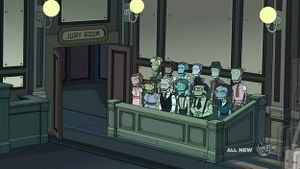 The gas forms as nothing but yokels.

Superior Gort Judge: Has the jury reached a verdict?
Robotic gas forms: No, we have not. For we have evolved to a higher state of consciousness. In the grand scheme, all physical beings are but yokels. Now, settle your petty squabbles and get the hell out!