Difference between revisions of "Roswell that Ends Well" 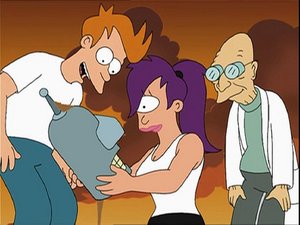 Bender's head reappearing after more than 1000 years in the desert

Act I: Which crazy thing happening are you guys screaming about?

September 21, 3002: The crew of the Planet Express Ship is attending an unique event, accompagnied by Professor Farnsworth and Dr. Zoidberg: a supernova right up close. For this momentous occasion, Fry decides to make some popcorn in the ship's microwave oven, but unfortunately, he uses a portion of corn wrapped in metal foil. This causes a microwave malfunction, it generates a field of blue radiation which collides with the red radiation emitted by the exploding star. Both fields react violently with each other and hurl the PE ship through a time tunnel which carries it to Earth. Without the help of GPS and with a failing drive, the PE ship crash-lands in the desert, which results in Bender's body being smashed to pieces all across the desert in the crash, he is temporarily reduced to his head. Zoidberg is left to pick up Bender's body, but just as he is finished, he is abducted with the parts by the soldiers of a nearby air force base. It turns out that the crew has travelled back to July 9, 1947 and has landed near Roswell, New Mexico. Bender's body is mistaken for an UFO, and Zoidberg is mistaken for an evil alien - almost correct.

Act II: Yes, we tore the universe a new space-hole all right!

Return to the future is only possible as long as the hole in the time-space continuum punched by the supernova remains open, which leaves exactly 24 hours. The crew has several tasks to complete: aquire a new microwave, rescue Zoidberg and Bender's body, all without upsetting history. Things become more complicated as Fry mentions that his grandfather Enos Fry is stationed at Roswell, which presents the danger of time paradoxes as he is the only one who can infiltrate the military base without arousing suspicion, as he is the right age to be a soldier, male and two-eyed. Meanwhile, the bases officers are interrogating Zoidberg and making tests with him, to little effect, and they inform the President. Fry, carrying Bender's head, sneaks onto the air base (disguised in an army uniform with the help of All Purpose Spray), and soon runs into his grandfather. Fry is desperate to remove him from any dangers that might threaten his life, but somehow, he manages to move him from one mortal danger to the next. When they enter a local diner, Fry also meets his grandmother, Mildred Fry, his grandfather's fiancé, but it seems that Enos is more interested in young men. Meanwhile, Leela and the Professor, both in heavy disguise, are attempting to buy a microwave, with absolutely no success as microwave ovens weren't introduced then and the sleazy salesman tries to unload a huge gas oven on them, much to the anger of Leela who seems not to apreciate antiquated female role stereotypes. Fry, in his attempt to bring his grandfather to safety, drives him to a remote house and tells him to stay there, then leaves. Shortly afterwards, the house is utterly vaporized by the blast of a nuclear weapon test nearby, as is Enos.

Act III: The President is choking on my gas bladder! What an honour!

Meanwhile, Leela and the Professor have ended up at the diner and are ordering lunch. Leela spots a radar dish in the air force base, which would suffice as a substitute for a microwave as it emits the same radiation, but the Professor vetoes her plan of stealing it. Fry arrives with the grim news that he has killed his grandfather, and everyone is puzzled why he (or, given their relationship, the Professor as well) do not vanish. Mildred receives the news of Enos' death and is down in the dumps, and Fry accompagnies her to her home where they end up sleeping wih each other, as Fry believes she can't really be his grandmother as he still exists. Later, he finds out that he was mistaken and that, by sleeping with his grandmother, he is his own grandfather. While this is happening, President Truman himself arrives at Roswell to handle the UFO case and the interrogation of Zoidberg. The scientists have arranged Bender's parts in the shape of an UFO, and the President orders a vivisection of Zoidberg, which costs him a number of his internal organs, including one of his four hearts which seems to be a permanent loss. The crew now has no other choice than to drop all secrecy and pursue their goals by means of force, as time is running out, and they decide that history must take care of itself as Fry seemingly already messed it up bigtime. The PE ship attacks Roswell Air Base, the crew liberate Zoidberg and Bender's body and steal the radar dish. While leaving the atmosphere, Bender's head falls out of the cargo hatch, and there is no time to retrieve it as the supernova hole is almost closed, the PE ship returns to the future. Fry, Leela and the Professor again travel to the remains of Roswell Air Base and search for Bender's head, eventually locating it and reuniting it with his still UFO-shaped body.

The first one being "A Head in the Polls".

This episode makes strong use of the Grandfather Paradox which is always present when dealing with time travels.

This episode introduces Fry's unique property that he is his own grandfather, which in turn causes a genetic anomaly which causes him not to emit the Delta Brain Wave, making him the ideal champion in dealings with the terrible Brain Spawn as he cannot be detected or affected by them.