Difference between revisions of "Season 5"

"Films" redirects here. For the in-show films, see Films in Futurama.
This article is about the fifth production season. For the DVD set labelled "Season 5" in Australia and the UK, see Volume 5.

Production Season 5 or the Direct-to-DVD films was the first season of Futurama after the 4 year hiatus that followed the cancellation of the show at the end of Season 4, it consisted of four films each cut into four episodes, making for a total of 16 episodes for the season.

In the course of season 5, Futurama initially deals a lot with the cancellation. And the hiatus of the show is at times referred to later. Season 5 picks up on things that first four seasons left unanswered. 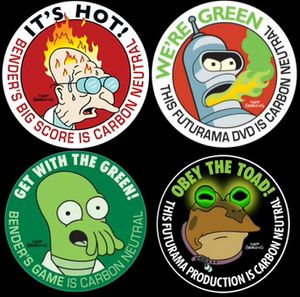 The logos that appear at the end of each film, promoting their Carbon neutrality.

Due to good sales on the DVDs for Futurama, FOX Home Entertainment had decided to order a couple of Direct-to-DVD films of Futurama, after negotiations, the producers agreed to fund four films, but on the condition that they would be able to be cut up into four equally sized episodes for television airing. 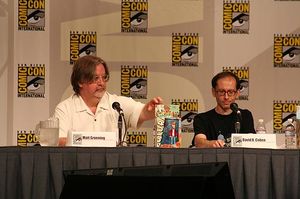 Work began on Season 5 in 2005, where the first few writers started brainstorming.

In January, 2008, Comedy Central obtained the rights to air Futurama on cable television in the United States, and started airing reruns of the former four seasons. They also bought the rights to air the new season 5, which is simply the films adapted for television broadcast.