This article is about the sixth production season. For the DVD set labelled "Season 6" in Australia and the UK, see Volume 6.

Season 6 is the first season of the second run, its first episode aired on 24 June, 2010 and its last on 8 September, 2011. With 26 episodes, it ties with season 7 as the largest season of the series, beating season 3 by four episodes.

The production season is spread out over two broadcast seasons, the seventh and eighth, with 13 episodes in 2010 and 13 in 2011. Both seasons end with a non-canon segmented episode: the seventh broadcast season ended with "The Futurama Holiday Spectacular" and the eight ended with "Reincarnation". Broadcast season 8, referred to by Comedy Central as "Season 6-B", began on 23 June 2011. Comedy Central chose to air Season 6-A in production order, similar to how Fox aired season 1; however, they are airing Season 6-B out of order, similar to how Fox aired seasons 3 and 4.

Season 6 was long the last known season of Futurama, before the series was announced to have been renewed for a seventh season in March 2011.[2] As a result, the finale episode of the season was constructed to work as a series finale, similar to "The Devil's Hands Are Idle Playthings" and Into the Wild Green Yonder before it. 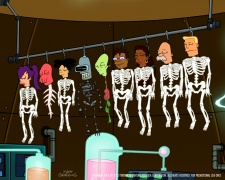 A majority of the characters die and are reborn (6ACV01).

The season opens where Into the Wild Green Yonder ends: the Planet Express crew (and others) are fleeing from the Nimbus, escaping into a wormhole with unknown end. As it turns out, they crash unto the ground in New New York, and as a result everyone except the Professor dies, and he has to rebirth them all (6ACV01).

A shift occurs in focus on the Fry-Leela relationship, following the final scenes of Into the Wild Green Yonder. They now consider themselves at least to some degree a couple (6ACV01, 6ACV07), and they finally sleep together (6ACV10).

Throughout 3010, the Professor constructs both a time machine (6ACV07) and a Mind-Switcher (6ACV10). Earth is invaded by both cats (6ACV08) and Omicronians (6ACV11), and Amy Wong finally gets her degree in applied physics (6ACV08).

Further information: Speculation of Futurama's return till the second run

Immediately after Bender's Game was announced, members of the media and fans started discussing the possibility of Futurama returning as a TV show. With the release of Into the Wild Green Yonder the speculation became intense. On 7 June, 2009, Collider.com posted a rumour about a new TV season.[3] Two days later, Comedy Central officially announced its return.[4]

Despite anticipation for news at the San Diego Comic-Con, 2009, Futurama panel, Matt Groening and David X. Cohen revealed nothing on the situation with the voice actors, only that they were hoping for the best.[9][10] The voice actors were, as expected, not present at the panel,[9][10] effectively putting an end to the debates on whether it was a hoax to stir up more talk about the show. 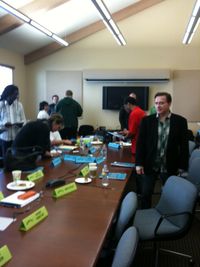 Table reading of episode "The Mutants Are Revolting".

Since Futurama was announced back in June, 2009, the writers room had been working on a non-stop basis, and on 7 August, 2009 the first table reading began, and the first recording session would begin the following week.[12] In February 2010, covers of episodes "The Mutants Are Revolting" and "The Silence of the Clamps" were revealed,[13] and more was revealed in the months to come.

The first coloured footage was presented by Rough Draft Studios to the producers on 11 March 2010.[14]

As in the original run, Rough Draft Studios continued to do the animation for Futurama for the sixth season. Animation-wise, technology had developed significantly since Futurama first aired, and in addition to the high-definition technology used for the films, season 6 was broadcast in widescreen and high-definition where available.[14] In contrast to earlier seasons, more animation work is done by Rough Draft Studios Korea, an overseas department of Rough Draft Studios in South Korea.[14] While this is a measure to cut cost, producers noted that the quality of the show was not to be diminished as a result.[14] 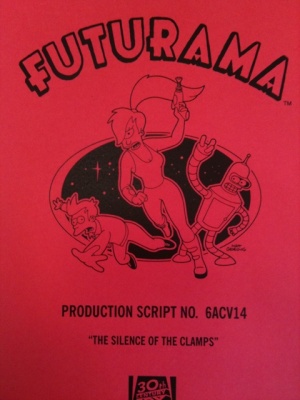 Cover of production script for "The Silence of the Clamps".

Before season 6 began airing on 24 June, revelations about the content of the season began making their way out to the public early on. When David X. Cohen was interviewed shortly after the show was announced to have been revived, he talked about some of their early ideas for the new season, such as references to Twitter and iPhones (6ACV03), and he teased about a "shocking relationship" between two main characters (6ACV04). Cohen stressed that the new season would focus largely on everyday life in the future, and be more focused on characters in contrast to the films, that were more plot driven.[15][16]

At the San Diego Comic-Con 2009, more information was revealed about the season. The two plots teased earlier were further elaborated on, and new pieces of interest included a plot about Fry and Professor Farnsworth finding a time machine that only goes forward (6ACV07), Zapp and Leela stranded on a planet alone (6ACV02), how Zoidberg met Professor Farnsworth (6ACV18), the origins of Scruffy and two new segmented episodes (6ACV13, 6ACV26).

In an 28 August 2009 Newsday story,[17] Cohen revealed that "[t]here are six scripts currently in the works, ranging in scale from 'it's a crazy idea that someone's grandmother thought of' to 'it's all on paper.' Without giving away too much, I'll say the first episode is tentatively titled "Rebirth" - and in a surprisingly literal fashion, as things turn out."

On a 3 October sneak preview, more plots were revealed. One episode were to involve Bender grave robbing in the Vatican, and as a result it will also involve the Space Pope (6ACV05). He also revealed a Nibbler story (6ACV08) and the eyePhones were revealed to be implanted into the eye. Futher interviews included Katey Sagal talking about the plot of "The Mutants Are Revolting", and the voice actors talking about how the new episodes were not only en par with the original run, but many times better and explaining that the writers and producers have come back with renewed energy.[13][18]

Briefly after the show's revival was revealed, Matt Groening explained that he had been inspired by J.J. Abrams' Star Trek film, in regards of rebooting a franchise, though Cohen clarified it, explaining that they "will not re-cast the actors" or anything that extreme. At the San Diego Comic-Con 2009, a question was asked to the panel about the ending of Into the Wild Green Yonder, to which Matt Groening talked about ignoring it all together, while David X. Cohen wanted to address the conflicts but warned viewers might want to "turn away" for a "literal rebirth" of the show.[9] The original concept of the first episode was to be set in another universe as a result of the worm hole, but Matt Groening moved to make a literal rebirth of the characters.[19] 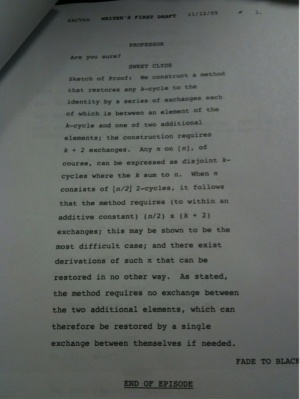 The ending in the production script for episode "The Prisoner of Benda".

During the course of the production, writing and recording of the sixth season, several partial details about plots were revealed through Internet services like Facebook and Twitter by Maurice LaMarche, Mike Rowe and an unnamed production staff member.[13] Pictures of scripts and production script covers emerged,[13][20][21] revealing the title of the hundredth[20] and the hundred and second episodes.[21] 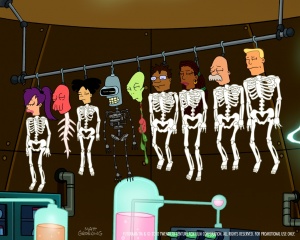 The copyright for the titles for the first eight episodes of season 6 was approved on 18 March 2010, and many episode titles were listed, one of which would later be changed from "Inspector #5" to "Lethal Inspection".[22] Further copyrighted titles for the following three episodes was confirmed on 16 April 2010.[23]

Starting on 5 May, 2010, Comedy Central Insider began posting daily updates and revelations about the upcoming season in a session they called Countdown to Futurama,[24] starting with a promo picture for "Rebirth" and continuing with promotional pictures and sketches from most episodes.

On 4 May, 2011, Comedy Central Insider began its second instalment of its Countdown to Futurama, specifically broadcast season 8 (or 'season 6b' as Comedy Central calls it) with previews of "Neutopia".[25]

"The Mutants Are Revolting" aired as the last episode of the main segment of the seventh broadcast season on 2 September, 2010. In the days after, the titles of several new episodes from the upcoming broadcast season were revealed, including "Neutopia", "Möbius Dick" and "Law and Oracle". Before the release of the seasonal "The Futurama Holiday Spectacular", which was aired between the two broadcast seasons, Futurama's 12 Days of Xmas Countdown was featured on the Comedy Central Insider, focusing on the episode.

On 2 December, the rest of the tentative titles as well as many story plots and writers were revealed at Can't Get Enough Futurama.[26] CGEF's owner, '[-mArc-]' revealed — however — that he wasn't entirely certain of the order, and noted that it was possible that it could change.[26] Eric Rogers revealed over Twitter that schedule had changed, and that his episode "The Silence of the Clamps" would first air on 21 July.[27][28] Later, Can't Get Enough Futurama revealed that "Neutopia" and "Benderama" would both air as the season première on 23 June.[29] Despite the change in schedule, the original order suggested by CGEF[26] seems to remain the production order,[29] indicating that broadcast season 8 would differ in order from the second half of season 6.

On 2 February, Vulture revealed that the new broadcast season would begin airing on 23 June.[30] 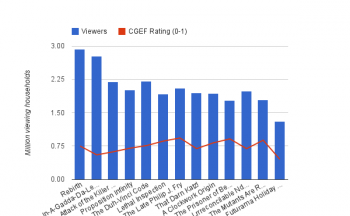 Viewers and ratings of the first half of season 6.

Season 6 has so far received mixed reception from both fans and critics, and is considered by many fans to be the worst season. Most viewers have been extremely critical of some episodes, especially from the first half of broadcast season 7. "In-A-Gadda-Da-Leela", "Attack of the Killer App", "The Futurama Holiday Spectacular" and "Yo Leela Leela" have frequently been called the worst Futurama episodes ever.

Meanwhile, several episodes have been very well received. "The Late Philip J. Fry" has frequently been called the best and most touching episode of all time, and "The Prisoner of Benda" has been called the funniest. "Cold Warriors" and "Overclockwise" were also very popular among fans.