Difference between revisions of "The Deep South"

"The Deep South" is the twenty-fifth episode of Futurama, the twelfth of the second production season and the sixteenth of the second broadcast season. It aired on 16 April, 2000, on Fox. It guest-stars Donovan as himself and Parker Posey as Umbriel. After being stranded on the bottom of the sea, Fry meets a mermaid. On the sea bed, the crew discovers the lost city of Atlanta.

Hermes has requisitioned a pet license for Nibbler, but there has been a mixup and he got a fishing license instead - a mandatory one, too. Thus the crew is forced to go fishing, and they all take the Planet Express Ship and travel to the exact center of the Atlantic Ocean, where the ship stays in hover mode and everyone is using different methods to attract and catch fish. Fry and Hermes stick with old-fashioned fishing rods, while Bender uses a laser-guided one. Leela aims higher with a harpoon, and the Professor experiments with Fish Pheromone which makes him immensely popular with Zoidberg. As Bender does not catch anything, he bends a parasol to get a giant hook and attaches it to the ships Diamond-Filament Tether. As the sun sets, they all pull in their lines and prepare to return home, but Bender's giant hook has attracted a Colossal-Mouth Bass which pulls the PE ship under the waves despite Zoidbergs best efforts to cut the unbreakable tether.

The bass pulls the ship to the ocean floor, about three miles deep, then escapes from the hook. The crew works to bring the ship back to working order, but the engines will not work under water and there is no food. Leela divides the crew in two teams - she and the Professor will work on the ship's drives, while Zoidberg and Bender, who can both survive at this depth, will look for food as. Fry wants to go with the forage party, which is made possible by the Professor's experimental Anti-Pressure Pill. While collecting food, Zoidberg finds an enormous shell which he adopts as his new home.

Fry, in the meantime, sees a mermaid, but no one believes him. During the night, the mermaid returns and knocks on the window of the crew's quarters, and Fry goes outside to meet her. She gives Fry a device which makes it possible to breathe and talk under water and introduces herself as Umbriel. She and Fry adjourn to a volcanic vent, where Umbriel asks Fry to tell her of the bizarre "landie" world he comes from. The two of them fall in love and travel around on the ocean floor.

The ship is repaired and is ready to depart, but the crew notices Fry's absence and goes looking for him. They find the remains of an ancient city sitting on the bottom of the sea, the legendary lost city of Atlanta, inhabited by an all-merfolk population.

Act III: "Yes, we all miss our loved ones and gases"

The crew is invited to the city, where they find Fry in the company of Umbriel and her father, the Colonel. They learn that Atlanta was once a land-locked city, but chose to move off-shore for the sake of improved commerce. When the city became overcrowded and overweight, it started to sink and many of the inhabitants left. Most remained, and in time, when the city had settled on the ocean floor, they evolved into merfolk with the help of the caffeine from the Coca-Cola bottling plant.

Fry choses to remain in Atlanta as he has fallen in love with Umbriel, and the rest of the crew return to the ship, where they find Zoidberg's shell home mysteriously burned down by one of Bender's cigars. However, when Fry and Umbriel try to make love, it turns out their anatomy is not quite compatible any more and Fry leaves in a hurry. The ship is just about to take off as he catches up, but Fry is able to grab the giant hook and is pulled after the ship. Just then, the Colossal Mouth Bass reappears and swallows both Fry and the hook.

Later, we see the caught bass at the harbour of New New York, and Bender is about to receive a check for $1000 because he has broken the record for the heaviest fish ever caught. The dead fish then releases both Fry and Hermes' Manwich. Although Bender is happy to have Fry back, the bass is now no longer heavy enough to break the record, leaving Bender without the cheque, and Fry in an all-too-tight hug with the angry robot. Zoidberg seems to have adopted the inside of the bass as his new home. 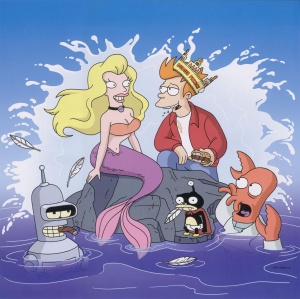 Hermes: Exciting news, people! The pet licence I requisitioned for Nibbler has arrived!
Leela: Hermes, that's sweet. I didn't know you cared about Nibbler.
Hermes: Dream on, woman! I'd like to put the little bastard in a sack and toss the sack in a river, and hurl the river into space, but I do like filling out requisitions, and these were some doozies!

Professor: Ah the exact center of the Atlantic Ocean, this seems the logical place for fish to congregate.
Bender: So we're in international waters?
Professor: Indeed so.
Bender: [on walkie-talkie] Falcon this is Blue Raven, the goose has nested, repeat, the goose has nested.[Speed boat pulls up and the driver and Bender exchange briefcases. Then the boat drives away.]Hey, guess what you're accessories to.

Leela: [After throwing her harpoon.] Bingo! Whatever it is, it's twenty times heavier than a boot! [Pulls a box labelled "Boots - 10 pair" out of the water.] Aaw!
Professor: You will never catch anything with this primitive technology! What you need is this Fish Pheromone, the most potent aphrodisiac known to fishkind. [Aims spray at hook, sprays his own head instead.] Uh oh. [A dozen fish spring from the water on his head, he scares them away frantically.]
Zoidberg: [Sniffs the Professor's head.] I'm so into you. [Licks the Professor's bald head with his mouth flaps.]
Professor: Oh, my.

Bender: [Has bent the parasol into an enormous hook.] There. Like most of life's problems, this one can be solved with bending.

Hermes: [Hearing the news that there is no food.] The important thing is that we don't panic! There are rules for situations like this! [Holds up a brochure labeled "Code of Conduct for Cannibalism".] Now, the first order of business is lunch. I suggest a nice Lobster Zoidberg. I mean, Lobster Newburg. I mean - Doctor Zoidberg.

Hermes: Fry, no! The pressure will crush you like a green snake under a sugar cane truck!
Professor: Not necessarily! This is a chance for Fry to test out my experimental anti-pressure pill. [Opens a bottle and takes out a black pill the size of a goose egg.]
Fry: I can't swallow that!
Professor: Well then, good news - it's a suppository!

Zoidberg: [Has acquired an enormous shell.] Look at me, I'm Dr. Zoidberg! Home-owner!

Fry: What's so far-fetched about mermaids? There's all kinds of weird sea creatures here in the future, like Dr. Zoidberg!

Fry: You know what I like best about you, Umbriel? You find me fascinating even if I'm not claiming to be a jewel thief or a lion tamer.
Umbriel: Lions? There are sea lions on the land?
Fry: Yep - we call them land sea lions. I tame them.

Leela: Fry, are you all right? What happened?
Amy: What about Umbriel?
Fry: Well it turns out I loved her, but I wasn't in love with her.
Amy: [whispers to Leela] Trouble in bed.
Leela: [nods sagely]

Leela: There, good as new. Except that we're three miles below the surface, we don't have any food, and the ship won't work underwater.
Bender: Tempers are wearing thin; let's just hope some robot doesn't kill everybody.