From The Infosphere, the Futurama Wiki
Revision as of 23:42, 17 October 2007 by Whaler on the Moon (talk | contribs)
(diff) ← Older revision | Latest revision (diff) | Newer revision → (diff)
Jump to navigation Jump to search 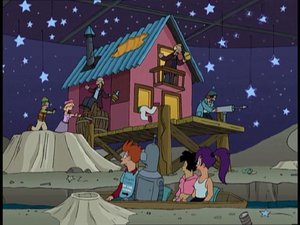 "We're whalers on the Moon, we carry a harpoon, but there ain't no whales, so we tell tall tales and sing our whaling tune!"

Born one year and three days before Philip J. Fry. Lives in Germany and likes it, believe it or not. Die-hard Futurama fan since 1999, recently re-discovered the charm of the series. Used the series in abundance to improve English skills. Great admirer of the One-Eyed Lightning.

I think I have fairly good English skills, but of course, I am no native speaker and they are not perfect. Don't hesitate to correct errors in grammar or spelling if you run across them. By the way, my main training grounds for English were, aside from school, Futurama and the books by Terry Pratchett.