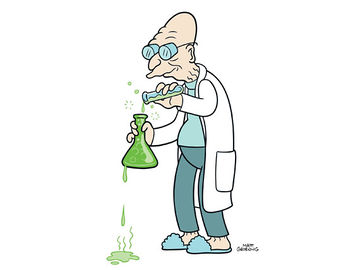 Who is that fellow? What is he doing?
Oh, dear! I really oughta do something!
But I am already in my pajamas.

Let's see how crazy I am now, Nixon!
The correct answer is "very".

Because I already know you're gonna ask, we deduced that the location in the "Simpsorama" screenshot released yesterday is set in Professor Frink's lab here (notice the corner at the back is identical to the one in the "Simpsorama" image). DannyJC13 (talk) 22:34, 5 September 2014 (CEST)

Is *the lab* in Springfield? If so, yes. If not, I think we shouldn't. Simply because there is no evidence of Springfield being a location in the promos/information released so far. (Although of course Springfield will appear. (I'm betting 10 Futurama euros. Professor Land fun bucks.)) I'm going to remove Springfield from the list; if someone confirms that the lab is located there, it should be put back in. Sanfazer: [talk] 23:52, 5 September 2014 (CEST).

If it changes nothing, then why use the harder one? BTW, what is the policy for becoming sysop on this wiki? Is it invitation, do you request it, are there elections. I'd like to become one (I know you can't edit user rights, just wondering) because I may be more active if I can bypass the CAPTCHA. Nalexa (talk) 04:43, 3 October 2014 (CEST)

Hi, I've noticed links to Wikisimpsons are still showing up as simpsonswiki.net. We moved to simpsonswiki.com a while ago, so I was wondering whether you'd be able to update the link to point there instead. Doesn't make much of a difference since the old .net URL redirects there anyway, but it'd be better to not have the redirection. Thanks, ☆The Solar Dragon☆ 14:09, 12 October 2014 (CEST)

This is important enough to cut your vacation

I'm sorry if you didn't understand me

I couldn't move the page, so I copied it. And pages always have the most we know about character's names. such as Bender Bending Rodriguez. So if her name is Carol, that's what we should use. Nalexa (talk) 19:04, 3 May 2015 (CEST)

Ah, 2007: The Infosphere was still an infant, everyone was excited about the upcoming movies, I lived with my parents, had practically no money and was about to finish uni, we were optimistic about Rudd and I think there was a war on, something to do with... sandwiches? - Quolnok (talk) 17:47, 4 May 2015 (CEST)

For me it was the year that Jennifer Lopez "sang" a song in Spanish for the ceremony of the announcement of the new seven wonders of the known universe in a country that many people still know as the land of Cristiano Ronaldo. Even if he was born on an off-shore island. (That's *my* country, for those that haven't seen my user page. I feel I should mention that, because in my opinion people will be better off knowing. (The country's name is Portugal, in case anyone is still doing m*a*th to figure it out. It's on Wikipedia. (But the "T" ain't pronounced like a "T". Be prepared for that.))) Sanfazer: [talk] 22:40, 4 May 2015 (CEST).

Once you've read this message.....

I'm deleting the original message so the vandal doesn't find it. Please remove the revision containing it. Nalexa (talk) 01:14, 27 May 2015 (CEST)

That doesn't matter. And deleting a message wouldn't stop them from reading anything, because they might have read it beforehand. Sanfazer: [talk] 00:16, 29 May 2015 (CEST).

Our survey says...EH-EH! WRONG!!! He said that in the animatic, he never said it in the actual episode in either the original or syndicated airings. LunchTime123 17:35, 19 August 2015 ‎(CEST) (timestamp added by Sanfazer (talk))

Yes. Shove him in the tube. It was my idea.
Where did I hear that before? Could it've been in a cartoon? No; that's impossible; *I don't watch* cartoons. I merely edit a cartoon wiki based on live-action adaptations of those cartoons that haven't been released for anyone but me. And they're pretty great. (They could do with a little "animation", though. Whatever that is.) Sanfazer: [talk] 01:44, 1 June 2015 (CEST).

I need private discussion (removed by poster; restored by pre-nostalgic sentimentalist (who're you lookin' at?))

As the newest bureaucrat

I signed in as Bender so I could change my password (as I am leaving, and this account has the power to delete the main page!) but the Special:Preferences bug is happening again. This is kinda urgent, but I don't want this account demoted because then I'll have to wait forever when I come back. Bender (talk) 04:51, 3 June 2015 (CEST)

We need to find a way to change my password, NOW!! I accidentally signed on to a computer to say I felt bad about the vandalism while I was gone, but the computer was KEYLOGGED! And my nalexa password is same one as bender! Nalexa (talk) 21:19, 28 June 2015 (CEST)

Please go to MediaWiki:confirmaccount-welc and set the message to the one you use for ips

Hi. I'm Loco87, an admin in Wikisimpsons and also a huge Futurama fan. I've noticed that the links to wikisimpsons don't work because they link to "simpsonswiki.net". They should be changed to link to "simpsonswiki.com". The ".net" used to redirect to the ".com" during some time after the move (from net to com), but now it doesn't redirect, so the links should be changed. Thanks! / Loco87 (TALK / Contribs) 13:01, 22 July 2015 (CEST)

Hello Sanfazer. I'm LunchTime123, though I don't have an account on this wiki. I would like to request one, but I'm just too damn nervous! What can I do? -- the preceding unsigned comment was written by 86.144.139.1.

Hey I kinda object to that :/

The way to resolve edit warring is protecting the page--not blocking them. ESPECIALLY if you're not blocking yourself. Nalexa (talk) 05:29, 10 August 2015 (CEST)

No it's not. Protecting the page would mean less edits just because someone decided to be unreasonable.
"Blocking yourself": I'm not the one making the edit. :) Sanfazer: [talk] 23:08, 10 August 2015 (CEST).

I have a question

Did you actually DECODE all that?!?!

You didn't revert the edit :P -- the preceding unsigned comment was written by Nalexa.

True. In theory, everything should have a source (which is the same as saying "a source that backs what it's a source for"), but since this is a small wiki you can expect that whatever change is justified and if it's not that someone who knows it will revert it. Sanfazer: [talk] 23:12, 1 September 2015 (CEST).

Is Linda joking about the windmills? I assumed that she was serious because she does seem ditsy. -- the preceding unsigned comment was written by 2.100.74.37.

We have a problem

That guy who keeps adding anything to do with diarrhoea or some nonsensical gibberish like that there is back again. [as Professor Farnsworth] Why? WHY?! WHY DIDN'T YOU BAN WHOEVER HE IS FROM THE INFOSPHERE??!! -- the preceding unsigned comment was written by LunchTime123.

Don't look at me! I've been blocking these gentlemen for as long as I can remember! It's just they like this hobby of theirs too much. Believe it or not. And who am I to crush people's hopes for the future? (No pun intended.) Fox? Comedy Central? Calculon's doctor? (I'm pretty sure those are other people, but I could be wrong.) Sanfazer: [talk] 23:08, 30 August 2015 (CEST).

Well, I could be Channel 4, Sky1 or The Queen of England, but you don't see me bragging on about it. -- the preceding unsigned comment was written by LunchTime123.

Well, the whole cops-and-robbers thing is probably what he wants. I propose we try leaving them that way for a few weeks and see if he stops. Nalexa (talk) 00:56, 1 September 2015 (CEST)

Who are you? My tennis instructor? -- the preceding unsigned comment was written by LunchTime123.

I propose we try leaving them that way for a few days and see if they stop. And if not we call the League of Robots. Unless it's a cartoon for babies. Sanfazer: [talk] 23:12, 1 September 2015 (CEST).

I'm sorry but that's a stupid solution. All it'll do is make the IP think "Hahaha. They've finally given up" then he'll probably go about making more edits. There are definitely better solutions. I gave you one below, range blocking. Just block every IP in the ranges the vandal edits from. ☆The Solar Dragon☆ 11:02, 4 September 2015 (CEST)

It's about deleted pages. For example, I just deleted my user page. I still have the option to create it even when logged out. Nalexa (talk) 23:53, 1 September 2015 (CEST)

The IP was already banned

Please stop linking to that one edit

My monitor turns red to black, and with the background I have no way of seeing that. I am looking at my own edits but everyone makes mistakes. Nalexa (talk) 04:34, 4 September 2015 (CEST)

Done. Can you request accounts while blocked? I included a link because it's a range (and innocent users may be involved) Nalexa (talk) 16:10, 4 September 2015 (CEST)

I don't know as we don't use the request account system at Wikisimpsons. And I can't see what the block user interface is like here. Is there a tick box that says something along the lines of "prevent account creation"? I'm unsure if that also prevents account requesting. You could try blocking your IP and seeing if requesting an account works.
Hopefully this will put a stop to most of it. He might get a new IP range in another location. All you can do is keep range blocking. Eventually he'll run out of places to vandalise from and IPs and it'll stop. I've had to deal with a handful of persistent vandals at Wikisimpsons over the years and range blocking seems to be the best way to stop them. ☆The Solar Dragon☆ 16:42, 4 September 2015 (CEST)