Why Must I Be a Crustacean in Love?

"Why Must I Be a Crustacean in Love?" is the eighteenth episode of Futurama, the fifth of the second production season and the ninth of the second broadcast season. It aired on 6 February, 2000, on Fox. It's mating time for Dr. Zoidberg's species, and the crew travels to Decapod 10 for him to join in the frenzy. On Decapod 10, Zoidberg finds himself in a battle with Fry for the affection of Edna.

Act I: "Just 19 hours until the mating frenzy!"

Amy and Leela persuade the rest of the crew to come to the gym, as they have been getting lazy and out of shape lately; Zoidberg agrees enthusiastically, as he says he has had too much energy lately. At the gym, he begins acting strangely (for example, insisting on bench pressing hundreds of pounds of weight), and when it seems he may become violent, the crew is forced to restrain him. The Professor examines Zoidberg, and determines that he is feeling the effects of the fact that it is mating season for his species. To help him, the crew must take him to his home planet of Decapod 10, so that he can participate in the mating frenzy. Fry, Leela and Bender set off with him in the Planet Express Ship.

Act II: "You're right, my stink gland is weak!"

After arriving on Decapod 10, Zoidberg sets up an erotic display on the beach and attempts to attract a mate. After a long day of rejection, Zoidberg is ready to give up. He then encounters Edna, a female he went to high school with. After she rejects him as well, Fry offers to help win her over by teaching him how to fake love. He tells Zoidberg what to say outside Edna's apartment, and then while they are out to dinner. However, Edna is reluctant, and when Leela reveals to Edna that Fry has been instructing Zoidberg, she falls in love with Fry, invites him over to her apartment, and attempts to seduce him. Fry is horrified and attempts to escape from her, but Zoidberg catches them together and assumes the worst. Edna confirms his suspicions by announcing that she intends to mate with Fry at the frenzy, and Zoidberg responds by challenging Fry to the traditional duel of Claw-Plach.

Act III: "How will I ever get rid of my male jelly now?"

Fry and Zoidberg begin their battle to the death in the recent and sacred tradition of Claw-Plach. The winner will mate with Edna. Fry, armed with a giant nutcracker, doesn't want to fight, but holds his own against Zoidberg, who is armed with his own claws. Just when Fry has Zoidberg at his mercy, he decides not to kill him. He starts to make a moving speech about friendship, but is interrupted when Zoidberg cuts his arm off. Fry, now willing to fight to the death, retaliates by beating Zoidberg with his own severed arm. The fight suddenly stops when they realize that the other Decapodians have left to perform the mating frenzy. Zoidberg is devastated to see that Edna has chosen to mate with the Decapodian leader (who is supposed to remain celibate), and misses out on the frenzy altogether. However, it is revealed that Decapodians die after mating, and so Zoidberg's life has been spared by his failure to secure a mate. He apologizes to Fry for attempting to kill him, and the two make amends. On the way home, Zoidberg tries to reattach Fry's severed arm, but messes it up and leaves Fry with two left arms. In his effort to fix things, he then cuts off Fry's legs and, implicitly, his head.

This episode was subject to censorship by BSkyB and Pick TV.

Zoidberg: It's all so complicated, with the flowers, and the romance, and the lies upon lies!

Amy: And Bender, your beer belly is so big your door won't even close. And that doesn't even make sense.

Zoidberg: Fry, look what you did, she won't shut up.
Fry: [whispering] That's normal. Just nod your head and say "Uh-huh".

Zoidberg: I choose my own claws. I want the tactile pleasure of chopping him right here, in the gonads! [points to Fry's neck]
Fry: Shh! Nobody correct him! 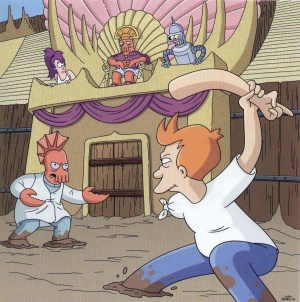