For you guys who were asking (or are outside the US), I have found an online outlet for these. I noted on the Toynami website that Toys'R'Us is one of their vendors. That's when it hit me: Toys'R'Us vends online through Amazon! That's when it hit me again: I could order them online, since my local providers are inconsistent and stupid. I'm not sure if you foreigners can order from the US Amazon (but I'm pretty sure you can), but I hope you guys can. Downside: They're a few bucks more expensive, and international shipping probably makes them even more expensive. Sorry, but at least you can get them! Rejoice! Do it! (And I'd be happy to photograph each of the action figures I have for this page, as well as accessories and the incomplete Robot Devil...) --Buddy 13:00, 2 April 2008 (PDT)

Dunno, since my government stopped supporting my studies a few weeks ago, and thus I have no money right now. Luckily it is only temporary. --SvipTalk 13:36, 2 April 2008 (PDT) 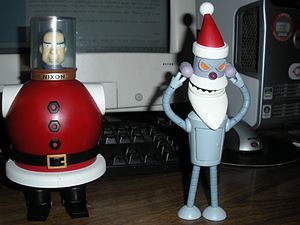 I totally knew the head-popping thing! My Bender hasn't arrived yet, but as soon as I got my Nixon, I looked at the bottom and said, "Hey, that looks like it'll stick on something" and then I remembered the only thing Nixon's head sticks on: Robot bodies! Oh, if only I'd mentioned it here, then I'd look totally prescient and awesome! Alas! --Buddy 10:42, 30 May 2008 (PDT)

What do you think, folks: Hot or not? Santa's head-peg doesn't fit in Bender's neck-hole, so I had to make him hold it up. And since Santa's hole is correspondingly bigger, Nixon's just sorta sitting there. But hey. --Buddy 00:04, 6 January 2009 (UTC)

Does this article need to be standardized to look more like the lists of other things (i.e., planets, species, that sort of thing)? I just uploaded pics of some of the action figures, and I'd love to see them here, but in the current format, it'd get pretty cluttered. Thoughts? --Buddy 16:13, 4 June 2008 (PDT)

I know some of you were wondering where to get a Bender shirt like mine, and I'm sure some other merchandise is difficult to get overseas, but I thought I'd let you know that Amazon suddenly has a huge selection of Futurama merch (the movies must be doing quite well), including the "Bite my shiny metal ass" shirt seen on my profile. Also, some of the rarer Comic Con action figures are available new (though they can be quite pricey). I've just added series 4 and 5 action figures to my cart, and the calendar for next year (An X-Mas Story is almost over!), and some other baubles. I can't buy everything Futurama, but I can certainly try! --Buddy 17:38, 21 December 2008 (UTC)

I just uploaded a bunch of pics of Series 4. Feel free to peruse them and decide which ones you'd like to use. Mark the other ones with TBD templates. --Buddy 23:48, 29 December 2008 (UTC)

Wow. I just checked and the white ball on the hat does indeed come easily free. So the accessory will probably be a spiked version of just that ball. Good find! --Buddy 17:46, 9 May 2009 (UTC)

I originally read that on PEEL I think. I also just checked the box from Calculon, there's a photo that confirms the accessories. - Quolnok 02:24, 10 May 2009 (UTC)

Perhaps since the Santas and the Universe 1 couple come in single boxes, unlike the pairs from the various series, these four rows should really be two rows. - Quolnok 13:38, 30 July 2009 (UTC)

Mine just arrived. Usually I do a few pics each, but I'm going to ask first: What pics do we actually need? I haven't taken them out of their boxes yet, so do we need one of them in the box? Or just each figure with its accessories sitting next to it? --Buddy 22:44, 21 September 2009 (UTC)

Only just arrived?! Mine turned up months ago. Who'd you get them from? Go with the box shot, then each of the three characters with their accessories. In Santa's case put the accessory arm and pompom on. - Quolnok 04:11, 22 September 2009 (UTC)

Does anyone know what Build a Figure is going to be in Series 9 now that Morbo is officially a regular Series 10 figure? Has anyone asked at the Comic con booth? I just found the whole line for cheap on Ebay, so I can start collecting them, and I want to know if I should still bother with Wooden Bender.173.62.7.187 18:57, 23 July 2010 (CEST)

We can't really say for sure if Morbo is or isn't the buildable, only that the promotional material sent to distributors listed him as one, but the most recent info, a label that contains only a few words and could easily be missing details, says that he's with Lrrr in series 10. Wooden Bender may have part of Morbo, or someone else, or just the standard Bender accessory of alternate eyes. - Quolnok 18:25, 24 July 2010 (CEST)

My series 1 Fry came in a bender box

I had preordered these figures when they first came out and my fry came in a zoidberg box, anyone else have this happen?

Hm, that's weird. However, The Infosphere is not a forum - these talk pages should discuss what to do with the article itself, not what is discussed. For discussion on Futurama and the merchandise, sites such as PEEL [1] are much better. - akitalk 20:37, 21 June 2011 (CEST)

There is an eBay and entertainment earth section for purchasing the Robot Devil figure that this article says is cancelled. If I were to buy it on either site, it wouldn't come? -- the preceding unsigned comment was written by 8.225.213.91.