Behind the Fungus: Makin' a Hit Song 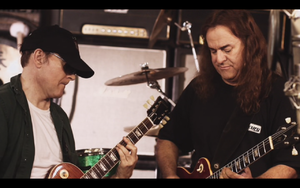 Behind the Fungus: Makin' a Hit Song is a five minute documentary included on the Volume Five DVD box set. It is a documentary of how the song "Shut Up and Love Me" was written and recorded by Billy West and Greg Leon.

"Shut Up And Loved Me" appear in the end of the "Proposition Infinity" episode, as a song by Wailing Fungus coming on the radio. The writers contacted Billy West, who does the voice for several characters on the show, and asked him to make them a song. Billy West is a musician, and plays the guitar and sings beside doing voices, and he contacted the guitarist Greg Leon to help him make the song, both playing guitar and singing backup.

The documentary has Billy West talking about the project, and singing and jamming with Greg Leon.