From The Infosphere, the Futurama Wiki
(Redirected from Munda)
Jump to: navigation, search

Turanga Munda is a middle-aged mutant human who spent her life before the mutant revolution in the sewers. She is happily married to Turanga Morris and they have a grown-up daughter together.

The Turangas' House in the sewers.

As a mutant, Munda has some special characteristics: Like her husband and daughter she has only one eye, and she also has tentacles instead of arms. Like her mother, grandmother and daughter, she has purple hair, often worn up. She also has a brown-haired tail, which is rarely seen. In her very first appearance, however, Munda had regular human arms and no visible tail.

In difference to her husband, Munda seems to be the more educated type, and she has a Ph.D. in exolinguistics. She is rather quiet in comparison to her loud husband, and is very nice and unselfish, if not passive-aggressive and a bit critical. She is very friendly and dedicated to her daughter Leela up to and beyond the point she'd rather die than letting something bad happen to her, though like her husband she always fears (or even suppose and accepts) that she might be ashamed of her parents. She and her husband own a mutant cat with a tail that is a snake, and they lived in a small house in the sewers up until the Devolution Revolution of September 3010, when they were allowed up on the surface. Their current housing situation is not certain, although it is likely that, along with most of the other mutants, she chose to remain living in the sewers. 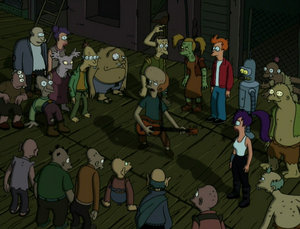 The first appearance of Morris and Munda (upper left corner)

Turanga Munda was married to Turanga Morris in 2972. When her daughter was born the "least mutated mutant ever" three years later, Munda and Morris conceived a plan to give the newborn a better life on the surface, by leaving her on the steps of an orphanarium, keeping Leela from living "the horrible degrading life of a mutant". Munda used her Ph.D. in exolinguistics to write a note in Alienese, so people would think she was an alien rather than a mutant. The note read "Your parents love you very much", but was never properly translated. Both swore to rather die than let their daughter know the "shameful truth of her origin." The two of them watched over Leela in secret from the sewers beneath the Orphanarium, leaving her presents and secretly helping her. After she left there, they kept tabs on her adult life via at minimum, newspaper clippings and the like.

However, many years later, in an attempt to save Leela from persecution by the other mutants, they accidentally attracted attention, and after a lengthy chase were almost killed by their own daughter, who mistook them for her parents' murderers, noticing Munda wore a similar braclet as herself. Morris and Munda avoided of telling her the truth, believing it was better for them to die than for her to realise she herself was a mutant. Only Fry's research and timely intervention saved them and told the truth, and the little family was reunited.(4ACV02)

Later, they both made a trip to the surface with permission from Citihall to meet with their daughter, however Leela could not meet with them because she had to protect her secret identity as Clobberella, which caused her some pain. When the Zookeeper learned Leela's true identity, he kidnapped her parents to coerce the New Justice Team to deliver the Quantum Gemerald to him.(4ACV04) When the crew was reverted to their teenage selves and later into childhood, Morris and Munda provided assistance by letting their daughter stay with them and briefly take up the childhood she had always wanted. Wanting to experience the real thing, Leela asked them to be as strict as they could, but they were constantly too lenient and Leela had to encourage them to be stricter. They also allowed the youthified crew to stay with the teenage Leela until the Professor worked out a plan to restore their true ages. Apparently the book containing the story about the Fountain of Aging belonged to them as well.(4ACV09)

In September 3010, Leela was discovered to be a mutant illegally living on the surface, and she was banished into the sewers. From there she led the Devolution Revolution, which her parents among other mutants joined, bringing rights to all mutants to be on the surface as much as anyone else.(6ACV12)

Soon after her 40th anniversary party she divorced with Morris due to that she wanted to explore the Universe, as mutants now had rights equal to regular Earthicans. Munda then briefly dated Zapp Brannigan, later reunited with Morris.(7ACV05)