The remote-controlled solid gold Death Stars were a series of weapons built by the Scammers after they took over Earth.

During the battle for Earth in 3007, they were all destroyed and, due to the assumed expenses for making them, may never be made again.

Apparently they can be easily destroyed if lasers are fired inside their Achilles Vent. 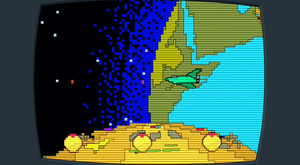 The control panel for the Death Stars.

Bender: Ooh! I'd take one of those with a side of chili fries.