But Fry isn't a cameo character. The whole idea of the Number 9 Man is that he appears at strange times! Which also means less images than if we did it with Fry. --SvipTalk 05:33, 6 December 2007 (PST)

Woah, according to Special:Statistics, this is one of our most viewed articles. \o/ We are getting more popular! --SvipTalk 09:45, 7 January 2008 (PST)

I checked the history of that article, it was previously linked to the Wikia Futurama wiki about the character. But we beat their asses, so I guess someone changed it to the real article. --SvipTalk 07:48, 9 January 2008 (PST)

That was actually me I only wasn't signed in when I did it but if you need proof it was me just ask me to prove it - Humorbot 0.4

Hi everybody, i'm not quite sure where and how to write it but it seems you missed the very first appearance of number 9 man - in 1ACV01. I could submit a screenshot if you wish, but got no idea of where to attach it in order not to spoil your nice page here...

Sure, we'd like to see it. If you want somewhere to upload it temporary, you can always use isarapix.com or imageshack.us and link to here like this: [http://domain.com/link/to/image.format]. Thanks. --SvipTalk 06:21, 3 March 2008 (PST)

Wow.That was a fast update))) i love SP3K, even wrote an article on it for russian biggest fansite, so it was easy to spot that (after 1000's times of watching it))) btw, another appearance of "numero 9", not described here, can be spotted in "The lesser of 2 evils" - at the Ms Universe ceremony, when Ms Methane is coming out... in the clouds of smell... Sorry, i don't have a picture here in the office, but am sure you'll find it easy. Hope that's of some help, regards, beck

the yet to be reviled caste system

is reviled the word meant to be there not revealed?

I don't know if anybody noticed this, but another odd reference to the Number 9 Man could be in Bender's Big Score when Nudar scrunges the hair shaped like a 9 on Fry. Reasonable?-- the preceding unsigned comment was written by Korikitsune.

I don't think so. It is merely a joke referring to the fact that 6 and 9 can look the same if you turn them around. So when one of the scammers propose it is a 6, he eats it and realises it's a 9. As if a 9 should taste different than a 6, but who knows, maybe their species is capable of detecting such? But I don't think it has anything to do with this character. --SvipTalk 13:10, 28 September 2008 (UTC)

Well they detect sources of information, and Bender's Big Score was the 'triumphant return' of the Number 9 man in a way, so I figured that the true nature of the hair being a nine could have been foreshadowing to his importance in Over the Green Yonder. -- the preceding unsigned comment was written by Korikitsune.

I very much doubt a relation between that and the Number 9 Man. It's way too speculative at the moment. It's sort of like people arguing that 6 times 9 is 42 in base 13 (read the Hitchhiker's Guide to the Galaxy if you don't get it). You are putting two things together that weren't meant to be put together. I am not ruling out I am wrong, but as it is now, I believe it to be too speculative. --SvipTalk 01:08, 29 September 2008 (UTC)

Because I can't find him. :( Where exactly is he in the episode? I mean, I just skimmed through the episode and watched all of the walking and crowd scenes and didn't see him or anybody that looks like him. -Mini-Me 14:21, 8 October 2008 (UTC)

Do we even know who listed that he's in that episode? If we can't find it (I'm gonna look tonight, myself), I say we take it off of there. It seems like it might just be a rumor at this point. I'll post my findings tomorrow (or sunday, if my net's down), and if I find him, I'll let you know where (I have no way to take Screens u.u) Jamklev 17:52, 10 October 2008 (UTC)

When I originally wrote the article, I based it on information found on PEEL and the Futurama Wikia, oddly enough, they had an article about him before we did (though, not oddly enough, our article is now better than theirs). In their article that episode was mentioned, however, it was not mentioned on PEEL. At the time I just needed some episodes to go with the article, I did spend some hours looking through A Big Piece of Garbage looking for him. But in vain... --SvipTalk 14:27, 11 October 2008 (UTC)

I think I found him, or at least what PEEL thought was him. If you look at the end of the episode, where Farnsworth is holding the trophy up and it's showing his back and the crowd facing him, in the lower right corner, there's what looks like a badly drawn number 9 man (without the 9 on his shirt). -Jamklev 16:28, 12 October 2008 (UTC) 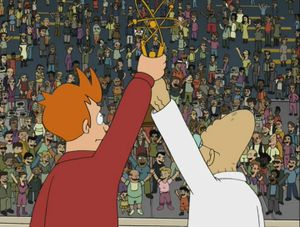 Come out, come out, wherever you are.

That was the one I was talking about. i was on a TINY screen at the time (11 inch at largest), so I thought the guy in white in the lower right might be him. Might be the same reason it was listed on there in the first place. On second inspection of the episode, yea, he's not there. Jamklev 21:25, 14 October 2008 (UTC)

Cure for the Common Clod

If everyone is different, it could be that he just has a different color shirt. It looks like there is a tiny bit of a different color (orange/yellow) on his shirt right above the bottom of the page. It could be that it's him, but he just changed the color of his shirt. The article says he is not wearing the number 9 shirt, but it might just be a different number 9 shirt, and we just can't see enough of it to get the 9. -Jamklev 21:07, 28 September 2008 (UTC)

It's hard to make it out in the scan, but there's a yellow cross hatching pattern on the shirt. I suspect that if we could see the whole thing, it would look similar to Captain Planet's logo, which represents the Earth. Thus, his shirt could represent unity rather than castes in this case. - Quolnok 07:54, 10 October 2008 (UTC)

Who does the voice of him in the trailer?

Since there are so many male voice actors on the show, it's getting tougher to distinguish between one and the other. Usually I go with David Herman because he's basically all of the miscellaneous voices on the show, but I'm not sure. Anyone know? - Jasonbres 01:10, 12 November 2008 (UTC)

If you can spot it, then you're a better man than I. Given his larger role than usual third characters, it might be Billy West. But maybe I am aiming in the fog here. --SvipTalk 06:49, 12 November 2008 (UTC)

I dunno. It doesn't sound like him. We used to think that Billy was the voice of Bolt Rollands, until the credits of TBWABB revealed that he was played by Phil LaMarr. - Jasonbres 18:21, 12 November 2008 (UTC)

A guess of mine would be that the producers avoid having the same actor acting too many characters in the same scene. So they can actually built a conversation in the recording room. Since he is talking to Fry, I'd guess it may not be Billy West after all. Another clue to Phil LaMarr being Bolt Rollands, might be the fact that in the first scene we see him in episode 4, he was conversing with Amy, Leela and Fry, and later the gas of pure energy, voiced by Billy West. Again, I aiming in the fog. Does this saying make sense by the way? --SvipTalk 19:04, 12 November 2008 (UTC)

Wasn't something said about him in a commentary? I would say Dave Herman, Maurice and Billy can't get that pitch while keeping that raspy sound. If not Dave, than somebody else. Sounds a little bit like Tom Kenny. Could be Phil Hendrie too. -Mini-Me 00:36, 13 November 2008 (UTC)

He was given the name Number 9 Man in 2007, almost two years prior to the release of ITWGY. I have moved the article to Nine, which is (to my knowledge) his only "official" name, having been used by Hutch on Mars. Sanfazer 00:34, 8 January 2011 (CET)