From The Infosphere, the Futurama Wiki
Jump to: navigation, search
Planet Express

The "Planet Express" article has been labelled the following levels:

developed-quality
This article is thoroughly developed.
null-focus
No focus level has been assigned.

I would like to explore more on the floorplan. I think I could draw up a rough layout and have it be fairly accurate. Other than things like the Angry Dome, they were pretty consistent with where things are (except, in Insane in the Mainframe, Roberto jumps from one window on the inside, and magically comes out a different window on the outside...). Also, I think this article is large enough to remove the Stub notice, what about you?

I think really Bender isn't company properity as they never bought him and aslo I am sure in the opening to the movie Hermes said he was some chief of something - Humorbot 0.4

Actually, Farnsworth says on countless occasions that he owns Bender. Not in the film though, but in several episodes, however, I cannot find a concrete example right now. --SvipTalk 09:24, 2 December 2007 (PST)

I think there is a line to be drawn between the robots, some are owned, some aren't. Whilest the Professor does claim to own Bender in 30% Iron Chef, it may have been the senility. He seems more like a paid employee and wasn't purchased or created by the Professor (like 1-X, the ship and the toaster are). Plus, the term "Assets" implies that he's benificial. He's "never made anyone's life easier and you know it!" - Quolnok 16:53, 21 December 2007 (PST)

I stumbled on a website featuring a Lego Planet Express building, ship, and several key characters. In an email correspondence, I discovered that the creator actually used our site (and it's many pictures) as references for the building. Hooray us! And now I"m off to petition the Lego company to make these into official sets that we can all buy. Dammit. --Buddy 13:48, 2 April 2008 (PDT)

I am wondering what role Katrina and Xanthor plays in comparison to the Planet Express company, they appear to be well known of the Professor, but maybe they are just that... friends. Maybe we could leave them with "Unknown Status Employees"? --SvipTalk 05:39, 27 April 2008 (PDT)

Yeah, they are the only people I can think of that could possibly fit that category though. They might be employees, former employees or just friends of the Professor, perhaps one of them simply rents the professor's spare room (if one exists). If you put that section in, I'd say "Status Unknown" - Quolnok 05:54, 27 April 2008 (PDT)
It does seem odd to have employees around that are seen less frequently than even Scruffy. Though it's obvious that they were created as a joke, it does make you wonder who they are. "Friends" feels right to me. --Buddy 08:37, 28 April 2008 (PDT)

So maybe they could be in the Professor Hubert J. Farnsworth article instead? Mentioned as friends of his. In some fashion. Also, welcome back, Buddy, where the hell have you been?! --SvipTalk 09:28, 28 April 2008 (PDT)

I didn't realize I was gone so long. It can't've been more than two weeks, can it? Or Can it have? Conjugating is hard. Anyway, yeah. I've been mentally occupied with flirtations of girl-kind. I sort of forgot the internet was there. It's like, I knew I wanted to check was was happening on the inter-tubes, but I kept being unmotivated. I hope it hasn't caused any inconvenience. :D --Buddy 09:31, 28 April 2008 (PDT) 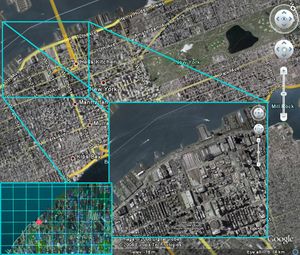 PE as seen with Google Earth

Well, it's definitely not Queens (wrong island), but it's a few blocks away from 57th Street. According to my Google Earth research, it appears to be somewhere between 40th St. and 20th St. 57th Street is the one that's actually on the bottom of Central Park, and Planet Express is clearly a few blocks off from that. Note that North isn't "up" in their map (it sort of rotates as they zoom in). Interestingly, Weehauken is almost directly across the river from PE. Google Earth --Buddy 00:52, 10 December 2008 (UTC)

There is also a thing called Google Maps, they have the ability of being able to being linked to. But some articles on Wikipedia provide a geolocation link (I suppose we can do something similar), which provides links to several map services including Google Earth. But is there anything wrong with what we have written thus far? --SvipTalk 01:16, 10 December 2008 (UTC)

From the commentary discussion on the topic:

John DiMaggio: Now I didn't know the Planet Express ship was in Queens.

David X Cohen: No, no that's the... it's on the West side of Manhattan.

John DiMaggio: Is that on the west side...

Claudia Katz: Yeah, it's on the pier side. We spent a lot of time...

John DiMaggio: Well that didn't look like a zoom in...

Dwayne Carey Hill: We spent a tremendous amount of time trying to figure that out.

Claudia Katz: I think it is.

Dwayne Carey Hill: I think we...

Claudia Katz: I think it's right.

Dwayne Carey Hill: Maybe we'll have to go back and check it out.

Billy West: Isn't it the Navy yard? Or something?

Claudia Katz: And I'm from Queens!

David X Cohen: We were actually looking at the and we decided that it was like West 57th Street maybe or something.

David X Cohen: Just from looking at that picture, but...

Dwayne Carey Hill: And the landscape changes over 3000 years.

I think it would do good with a Planet Express building article, and this article also seriously lacks a good history section. --Sviptalk 18:26, 6 August 2009 (UTC)

Everything can always be improved, that's what being a wiki is all about! I'm leaning towards "headquarters" (unbracketed), although the term was not used on the show from memory. Technically, either one would work. - Quolnok 11:16, 7 August 2009 (UTC)

This article is nominated to be a Featured article, but it cannot be until it has got rid of its update template (the top of the article). If anyone feels like a nice fellow, he or she can improve the article. After a quick read-through I don't think there's a lot of faults in the article. It would help a lot if someone could give it a thorough read through, edit what seems editable and then remove the update template. I might do it myself, but it can take a while before I get around to it. Aki 18:19, 1 March 2011 (CET)