From The Infosphere, the Futurama Wiki
Jump to: navigation, search
The Simpsons

The "The Simpsons" article has been labelled the following levels:

developed-quality
This article is thoroughly developed.
null-focus
No focus level has been assigned.

That is ture although I can't remember what episode he replaced Bart in a couch gag, can't find which episode it is on Wikipedia anyone know the episodes name- Humorbot 0.4

This could be a reference to the Robot Devil, all the more likely, it's simply a reference to The Devil Went Down to Georgia, it's just that both Futurama and The Simpsons Game referenced the same material. You guys can put it back in, but it's highly unlikely that this is really a direct Futurama reference.

While not a direct Futurama reference, it could be mentioned that they are both referencing the same thing. Or something. --Buddy 18:19, 18 January 2009 (UTC)

Both Simpsons and Futurama mentioned the Daily Growl. The Simpsons mentioned it in a recent episode, Double, Double, Boy in Trouble, so I'm guessing that maybe they referenced Futurama maybe? Unless it is already here... Or Futurama referenced it from somewhere else... Chris of the Futurama 02:23, 26 January 2009 (UTC)

Next time wait for one of the bureaucrats to fix it. We're usually here pretty quickly, especially if a note is left on one of our personal talk pages. - Quolnok 11:16, 18 April 2009 (UTC)

Very subtle one. In the Simpsons episode 'Mayored to the Mob', Uter wears a T-shirt bearing the Futurama logo [1]. There may be more references to Futurama in the sci-fi convention in that episode, but that's the only one I recall off the top of my head. Sordyne 01:57, 18 April 2009 (UTC)

I can only screenshot Futurama Vols. 1–4, and the movies. I have no scanner, hence no comics, and no Simpsons DVD's. Though I could in theory get my hands on Season 4, which might help for one screenshot that I can think of, but I'd have to check if we already have it. --Buddy 18:26, 20 May 2009 (UTC) 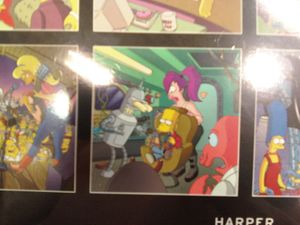 The 2010 Simpsons wall calendar features a Futurama crossover. I'm not sure which month, but it's visible on the back. I'd add it, but I'm not sure where it'd go. And I can't really provide scans, either. I could provide a low-quality picture, but that's about it. We sell them where I work. And of course we don't have the Futurama one. --Buddy 14:53, 29 August 2009 (UTC) 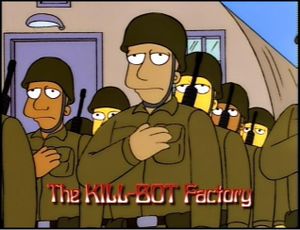 In Simpsons episode 1F14 aka "Homer Loves Flanders" (season 5), Kent Brockman opens the episode with an "Eye on Springfield" report about the United States Army and a base near Springfield. He dubs them the "Kill-bot Factory", in his typical sensational fashion. Obviously, Killbots would later make appearances and mentions in Futurama. Just wanted to see what anyone else thought about including this in the article. -- DeepSpaceHomer 04:10, 30 December 2010 (CET)

I think it's fine. You can include it yourself, seeing as you seem to be more knowledgeable about the subject. San Saber 00:50, 31 December 2010 (CET)

Thanks for the period. Apparently punctuation is now my mortal enemy. -- DeepSpaceHomer 01:29, 31 December 2010 (CET)

Two references in The Simpsons Movie?

There may be two references to events in Futurama, specifically the episode Leela's Homeworld (though not likely intentional). First, we have Homer dropping the silo of pig crap into Lake Springfield, turning it green and toxic. It seemed similar to when Bender was dumping toxic waste into the sewers and turned the waterways green and radioactive. But there is a stronger example within the same scene, when a squirrel jumps into the lake and mutates into a horrible abomination of a creature. That struck me as very much alike when the mutants lowered a rat into the waterway and it, too, turned into a mutated abomination.

The first example might seem a little vague, but I thought the second could definitely be considered a reference. And I can provide screenshots for both of them. -- DeepSpaceHomer 20:10, 18 January 2011 (CET)

I added the section, but I unfortunately goofed when I uploaded the picture of Lake Springfield (File:Simpsons Movie Lake Springfield.jpg) by failing to put the licensing on it. Do you know how to add it? --DeepSpaceHomer 22:05, 18 January 2011 (CET)

Nope. I'm not accustomed to doing that kind of thing. In general, as this is a Futurama wiki, I think The Infosphere doesn't mind if you upload a Futurama image without providing the usually necessary information you have to provide in places like Wikipedia. I don't know about Simpsons images, though. Also:
Sanfazer 22:27, 18 January 2011 (CET)

Well, thank you anyway. While I don't think it will, I didn't want my blunder to get anyone in trouble. And you are right: the second one was probably the only one actually worth including. But I will leave the first one in place, for now at least. And thanks for the formatting tip. -- DeepSpaceHomer 22:43, 18 January 2011 (CET)

Patrick Stewart should be on the main Simpsons reference page as he was in at least 2 Simpsons episodes and (off the top of my head) in the "31st Century Fox" episode of Futurama. -Zigeal (11-12-16)