From The Infosphere, the Futurama Wiki
(Redirected from Time paradox duplicate)
Jump to: navigation, search 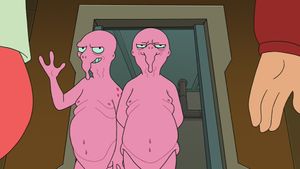 Nudar and his doomed duplicate.

Mechanics of the Paradox and Self-Correction

1. An entity uses the time code to travel to the past.

2. Once in the past, the entity uses the time code a second time.

3. The entity, upon encountering the version of itself from step 2, takes some step to prevent the time travel that occurred in step 2.

The paradox is thus that the second instance of time travel has been inadvertently removed from the timeline.

All of these have met their doom.

Although it was argued that time-paradox duplicates of Fry, Bender and the Professor were created from the Forward time machine, and subsequently killed by being crushed by the original versions when the machine appears directly above them after time travelling, these were in fact not time-travel duplicates, as they were the original Fry, Bender, and the Professor, simply originating from the universe two universes after the one the "originals" came from. No paradox was created, since they were from a different universe; it was merely very convenient that the "originals" were able to take their counterparts' places in the new universe. Moreover, the doom field and the time code were not involved in this incident at all.