This article is about the episode. For the in-universe organisation, see 30th Century Fox.

"31st Century Fox" is the one hundred and twenty-fifth episode of Futurama, the eleventh of the seventh production season and the ninth broadcast season.

Bender becomes the hunted after saving a robotic fox from hunters.[1] 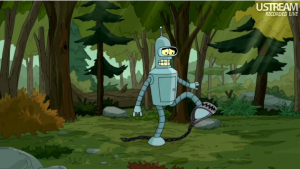 A screenshot from the episode shown during the live stream, showing Bender caught in an animal trap.

On 12 July, following the broadcast of the episode "Zapp Dingbat", the public were given the opportunity to participate in a live chat with the Futurama cast and crew. Several clips of "31st Century Fox" were shown during the live stream.[4]

On 30 January 2012, Eric Rogers revealed that his favourite episode from the ninth broadcast season was either "The Bots and the Bees", "A Farewell to Arms" or this one.[5]