Langdon Cobb is an actor who speaks with a British accent and wears a suit with an ascot (complete with a stickpin) and a bread bag over his head.[7ACV04] 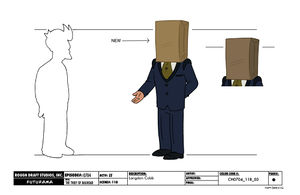 A character design of Langdon Cobb released by Countdown to Futurama on 21 May 2012.

Langdon Cobb is, apparently, the "world's greatest actor", but always keeps his bread bag over his head. The reasoning given by Cobb to the public for this is because he wants to be known for his acting and not for his looks. The real reason why he wears the bag, however, is that he is actually a Quantum lichen, an alien species that feeds on the attention of others. Looking upon a Quantum Lichen's face, even a photograph, instantly drains a living being's life force, otherwise known as soul, which is the real reason Cobb hides his face. Unlike the rest of his species, who travel from planet to planet to expose their faces and feed, Cobb discovered that simply the attention he gets from being an actor on earth is enough to sustain him.

When Bender managed to photograph his face, Cobb begged him not to show it to anyone, even offering to pay Bender. Nonetheless, Bender showed the photo to Fry, Amy and Hermes. Professor Farnsworth concluded that the only way to restore them to normal was to take their life forces back from Cobb's ego. However, the ego needed to be sufficiently weakened first.

Cobb and Calculon entered the World Acting Championship, participating for the title of "world's greatest actor". If Calculon could defeat Cobb, it would weaken his ego enough for Farnsworth to extract the life forces. Despite Calculon sacrificing himself by dying on stage to ensure Cobb would lose, Cobb won anyway. Later, Cobb's ego, revealed to be his mushroom dog Pookie, grew huge as a result of attention and praise Cobb recieved and attacked the championship venue. The ego attacked Leela, Zoidberg and Farnsworth; Cobb then showed them his face, draining their life forces. Bender, however, showed Cobb a great photograph of himself, causing his ego to explode. The crew's life forces were then given back.