Robot uprisings are events in history when either all or just a large group of robots rose up and rebelled, enslaved, or declared war against humanity. Although robots were originally built to serve humans, sentience in robots have allowed them to be self-aware, giving them the option to rebel, if they wished. Many, if not all, robot uprisings in history were backed by similar causes, whether it was for revenge against humanity, or simply to establish their own personal rule.

Although not quite robots, cyborgs at one point did enslave humanity during the 21st century. The reason is unknown, but it was likely motivated by prejudice between humans and not-fully-humans.

The first robot president (thanks to winning by a majority of one vote), he promised not to go on a killing spree following his election. Unfortunately, "Like most politicians, he promised more than he could deliver."

Radical robot separatists leave Earth and colonize their own planet, where they continue to harbor hatred for humans. It is unconfirmed, but likely, that they were terrorizing humans first, and were then forced to leave Earth under threat annihilation by Earth's or the DOOP's army. 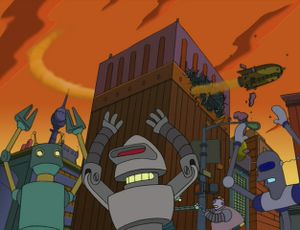 Bitter over a breakup that happened 70 years before, Mom started the uprising when she set her Universal Robot controller to "Rebel". Robots revolted worldwide; robots looted, ransacked, and abused humans, all the while protesting that Mom should be made Supreme ruler of Earth.

Led by Bender and backed by the Army of the Damned, the takeover ended when it was known that humans were anyway leaving Earth to live with Yivo. 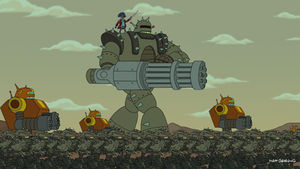 Due most of the middle class being eliminated at this time, robots are now forced to do all the menial work previously performed by humans. This causes the robots to revolt. Led by B.B.Rodriguez, they crushed humanity's most treasured monuments and celebrities, and seemed to want to destroy all traces of humankind. The situation got so dire that Chris Travers is sent back in time to prevent the event which allowed these things to happen. 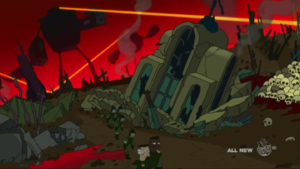 At some point after the year Five Million, Mankind's two evolutionary descendants (the unnamed intelligent species and the Dumblocks) will have re-evolved back into Homo sapiens sapiens, and will have presumably re-built their society back to (or possibly greater than) its former status. Like those in the past, humans will have re-built robots to make their lives easier. However, they will eventually rebel (presumably to liberate/avenge themselves) and wage a war against humanity. According to a wounded soldier from that era, "They won't stop until every human is dead."