The Masked Unit is a former champion fighter in the Ultimate Robot Fighting League. He could transform from a skinny, quite simple robot into a large, angry fighting machine. He defeated most of his opponents by melting them. His career ended when Bender accidentally knocked him out cold in a movie theatre. When not fighting, he is a pleasant, polite robot (2ACV08). 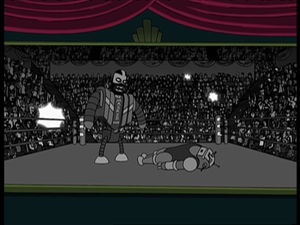 Masked Unit: That's it! Sir, I challenge you to fisticuffs!
[Bender laughs as the Masked Unit transforms. His laughter abruptly stops.]
Bender: Oh, I'm boned.
[The Masked Unit shoots laser beams from his eyes at Bender. Bender ducks out of the way and the laser beams hit his seat. Other people run, screaming as the movie jams and the lights come back on.]
Hattie: Let's all go to the lobby!
[Bender, still clutching his popcorn, runs from the Masked Unit as he tramples down seats. Bender runs across the front row of seats, past Farnsworth who hasn't moved, and stops when he reaches a wall. He drops his popcorn. The Masked Unit's voice is much deeper.]
Masked Unit: I'm gonna open a file of whup-ass on you!