From The Infosphere, the Futurama Wiki
(Redirected from The ship)
Jump to navigation Jump to search

The Planet Express ship, named Bessie in 3013 (7ACV15), is an intergalactic spaceship designed and built by Prof. Farnsworth (1ACV01). Its color is said to be Electric Mucus (BG). The ship is capable of traveling at 99% light speed (4ACV09), which is a lot faster than traditional light speed, since the speed of light was increased in 2208, but in fact it does not move at all. Instead, its engines move the universe around it. This is made possible in part by its incredible dark matter reactor equipped with afterburners providing 200% fuel efficiency (2ACV10), and the ship needs about 63 balls of dark matter to be full. However, due to dark matter becoming ineffective as fuel (BG), it now runs on whale oil (ItWGY). The ship has the LX package, but the only noted upgrade is a gold hood ornament which was stolen by a punk in a rough space neighbourhood (BG).

The ship is surprisingly comfortable inside. It carries two Hover Dollies to help move heavy cargo around (2ACV02). The ship can also be used in combat (with a top turret as well as two torpedo tubes, which can double as the 'primary lasers') and has fought against the Robot Mafia, the Space Pirates, and the Omicronians during their first invasion of Earth. It is so effective in battle that it fought in the defense of Earth with the DOOP forces.

The ship's computer is sentient. For a while, it was involved in a romantic relationship with Bender (4ACV03). When things turned sour, they had to wipe the ship's memory to regain control.

In 3013, the ship was converted into a speed racer by the professor and was replaced by a safer ship by Leela (7ACV15). Eventually, the upgrade must have been undone. In this year, Fry also sold the ship for two giant beans (7ACV22). The ship was later re-acquired (7ACV23).

It is joked about in the DVD commentary for The Beast with a Billion Backs that the Planet Express ship seems to have numerous different systems, many of which are redundant. Specifically, jokes were made about how using a crane to load dark matter was that film's method of doing so. While it is obvious that the redundant systems are mistakes on the part of the writers, an in-universe explanation for this could be Prof. Farnsworth's senility causing him to create more mechanisms to perform a task that would never be necessary. It can also be explained by the numerous times that the ship needs to be rebuilt that it necessitates that a new system be devised.

Like all leading characters in the show, the ship has an overbite.

Parts of the ship 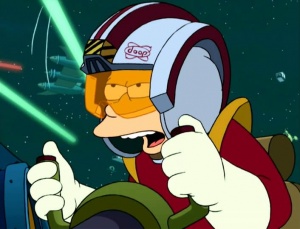 Fry in the turret. 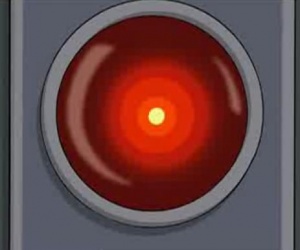 Bender and the autopilot have had drinking contests, and Leela has referred to the autopilot as a drunk (although it is apparently standard protocol to carry a full compliment of olives with which to make martinis). The autopilot is also known to find certain art offensive, particularly art with explicit nudity.

In "Robot Santa's Little Helpers", Leela is shown to have designed a "Holopilot", with the appearance of a fat, ugly Amy.