Difference between revisions of "Alien languages" 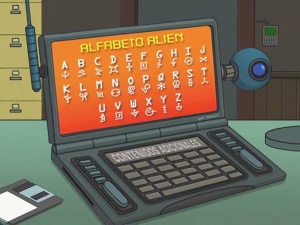 AL1 appearing on the DVD

The alien languages in Futurama are set of background jokes, appearing in the background through out the length of the show. The intention of these alien languages was for its viewers to discover how they work and then decipher them, feats at which its fanbase have excelled.

Technically, they are not 'languages' per se, but a ciphered form of English, or more precisely, Latin characters, since not all of their 'translations' are in English.

There are only two of these 'languages' known to exist, or at least deciphered. Some fans believe a 3rd language was introduced in the fourth season, but this has never been confirmed.

The first alien language (Alien Language 1; AL1) is a simple substitution cypher. This means that each Latin letter is simply replaced with a new symbol. The script can be translated into English simply by learning each symbol, or by looking it up in a table. Albeit missing the questionmark which looks like an arrow pointing upwards with a dot at the base of the shaft.

In the episode "Leela's Homeworld", the script is referred to as "Alienese". 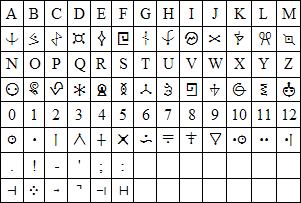 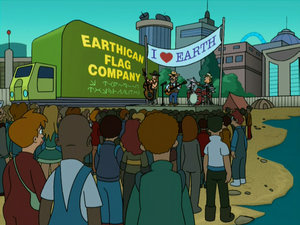 The second alien language is more complicated, a variation of the classic autokey cipher, and is not for the faint of heart. Each symbol has a numerical value. To decode a message, the first symbol's value is translated directly into a character (0='A', 1='B', and so on). For the remaining letters, you subtract the previous symbol's numerical value. If the result is less than zero, you add 26. Then that number is converted into a character as before.

Not until the release of Bender's Big Score was the symbol 1 ("B") known. It was not used in the movie, but was released as part of a special feature on the DVD called "Bite My Shiny Metal X", a special lecture discussing the math of Futurama.

Note: If you ever see two identical symbols in a row, the second is always an "A". 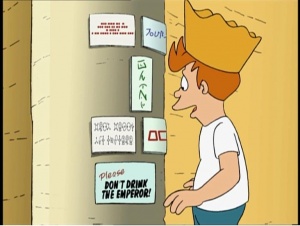 Various Alien Language symbols. The highest one up (in red) is Morse Code.

If two Alien Languages aren't enough, the Futurama writers have also done other Alien Languages that seem to be Gibberish, and have not been translated, like Leela's bracelet under her Wristlojackimator, various symbols in "My Three Suns" and others.

In November 2013, David X. Cohen revealed in an interview that the writers had created a third complete alien language, one which he described as "more cryptographically secure". Due to its complexity, though, the language was never implemented into the show. [1]