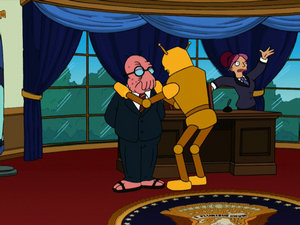 Act I: So these three parasitic worms bore into a human's head...

During amateur nite at the Comedy Simulator, Zoidberg follows Humorbot 5.0. Unfortunately, Zoidberg isn't funny at all, and gets booed off the stage.

Zoidberg is miserable, because his uncle Zoid was a comedian, and he wants to follow in his footsteps. The Professor, being a Harold Zoid fan, pulls out an old 78 Million RPM HoloDisk to show the crew. The HoloDisk shows an old silent film, in which Harold Zoid portrays a barber who ends up beheading his customer. Zoidberg decides to write a letter to his uncle to ask for help on his comedy routine. He writes the letter using ink collected from his ink pouch.

In the Final Curtain: Old Actors' Home, Harold Zoid reads the letter. Another resident of the home asks Harold Zoid what the scribble-di-gook is. Harold Zoid explains that Zoidberg may be his ticket out of the home, and then writes a letter to Zoidberg asking for money and telling Zoidberg to come to Hollywood, which Zoidberg reads to the crew.

They set off for Hollywood. The crew then goes on a tour bus. 30th Century Fox studios is the first stop. Bender jumps off the bus when it passes Calculon's house, and impersonates a hot-water heater to gain entry. Zoidberg then leaves the tour to meet Uncle Zoid for lunch.

Uncle Zoid tells Zoidberg that he's unfunny, and tells him he should go into drama. Conveniently, Uncle Zoid has a script for a drama, but needs a million dollars to get it produced, and Zoidberg agrees.

Zoidberg is upset about lieing to his uncle, but Bender comes in and offers to ask Calculon for the money. The crew goes to the studio, and Bender presents the script to Calculon. Bender entices him by guaranteeing Calculon the Oscar. Initially, Calculon declines on the basis that he doesn't like the font. However, once he spots the legendary Harold Zoid's name, he agrees to star in the film.

The film, "The Magnificent Three", is about a son, the vice-president, who doesn't wish to follow in his father's footsteps (the president).

Harold Zoid turns out to be a horrible director, and gives ridiculous instructions to the actors and extras. While looking for a parking spot for the premiere, Leela lands the ship in the La Brea Tar Pit, and the ship sinks, trapping her and Fry. Not surprisingly, the film's premiere is a terrible failure. Calculon threatens to kill Bender, Zoidberg, and Uncle Zoid, if they don't get him the Oscar.

Act IV: How 'bout we rig the awards?

When the Oscar nominations are announced, The Magnificent Three is snubbed. Calculon is infuriated, and Uncle Zoid offers to rig the awards.

Leela is unable to start the ship to escape the tar, and Fry spots a caveman skeleton outside the window, which he misidentifies as Sylvester Stallone.

Back at the home, Uncle Zoid despairs. Zoidberg, however, sets off to save their lives.

At the Oscars, Bender sneaks Zoidberg inside disguised as food. Harold Zoid enters and tells Joan Rivers' head that he's only there to fill space.

Act V: I always knew I'd die at the bottom of a pit, but a pit full of tar?

Billy Crystal's head, the host, begins giving out the awards. The Planet Express Ship hits the bottom of the tar pit, and Leela detects the L.A. subway system below them.

Bender and Zoidberg take over and Zoidberg announces Calculon as a nominee for Best Actor. Zoidberg sees Uncle Zoid's depression, and announces him the winner instead. Harold Zoid makes an acceptance speech, and then takes Zoidberg and Bender to the afterparty. Calculon storms in and demands the oscar, but gives it back. Then the ground begins to shake, and the Planet Express Ship explodes from the subway system. Fry and Leela are allowed into the party because the caveman's skeleton has stuck to Fry's pant leg, and the doorman assumes it's Sylvester Stallone.