The Alien pet is a creature whose body resembles a brain and who has snail eyes, many legs and a mouse tail and wears a leash (7ACV01). 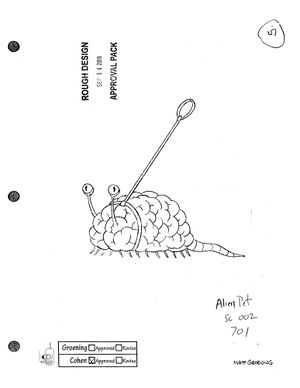 The Alien pet was first seen in a design released by Countdown to Futurama on 3 May 2012. [1] In a podcast released five days later, Futurama co-creator David X. Cohen said that "[the pet was] probably the least important character ever to appear on Futurama, at least, until it [came] back again", that "the very first sentence of the very first script of [season 7]" read "a few people jog and walk their Alien pets in the peaceful, early light" and that the pet would be "on screen for about four seconds". [2]