The barrier-bots guard the entrance to the Near Death Star. In 3001, they only let Fry in, thinking him to be Professor Farnsworth, when he provides them with a tissue sample (courtesy of Cubert), and impersonates an old man, and later, when Fry, Leela, Bender, and Cubert escape the Sunset Squad chasers, they break off the arm of one of the barrier-bots. [2ACV10]

When fleeing with the Professor's parents, the one who had his arm broken before lifts his arm only for them to smash through his head instead. 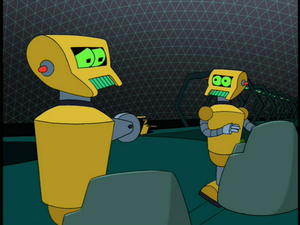 Fry: What? I'm old! Listen. [impersonating Farnsworth] Hey, you kids! Get off the lawn!
Barrier-bot #1: Hm. It is true that old people are often concerned with children on their lawn.
Barrier-bot #2: There's no denying that.