Bender Should Not Be Allowed on Television

From The Infosphere, the Futurama Wiki
(Redirected from Bender Should Not Be Allowed on TV)
Jump to: navigation, search

"Bender Should Not Be Allowed on Television" is the sixtieth episode of Futurama, the sixth of the fourth production season and the fifteenth of the fifth broadcast season. It aired on 3 August, 2003, on Fox. Bender becomes a television star as well as a terrible role model for children. 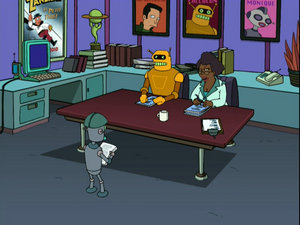 Auditions to find a new Antonio

Cubert and Dwight are dreaming of imitating anything they see on TV, particularily anything on All My Circuits, like amnesia which seems to have every character in its grip. As Calculon is throwing a big birthday party on screen, Cubert wants to have a big party too - but do clones even have birthdays? Professor Farnsworth says no, but he concedes that they can celebrate the day he scraped the cells for the cloning process off his back - thirteen years ago the next week. Around this time it will be Dwight's birthday too, so Hermes has the idea of combining both events in one party at the office and writing it off as business expense. Meanwhile, on All My Circuits, Antonio is having a technical breakdown, and the popular show "Everybody Loves Hypnotoad" is put on. Dwight's and Cubert's party is not a success, no one has turned up except the crew, their families and Tinny Tim, but Bender brings the news that All My Circuits is holding an open casting call for a child robot to replace Antonio and that he is intending to take it. At the audition, Bender boos out every competitor which makes Calculon reject them, and when it is Benders turn, he is accepted because Fry and Leela are cheering madly, despite the fact that Bender can't act.

Act II: "Now my character has a British accent?" 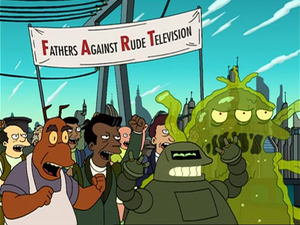 The first shooting in the studio starts with a disappointment for Bender, as his character is supposed to be in a coma. Bender, however, decides to do a little improvisation and does what he does best - singing, dancing, and smoking. Calculon decides to take the scene, as he never does two takes. After seeing the result, Calculon decides to fire Bender. But then, the Execu-Bots who run the network show up and decide that Bender stays on the show, for he stimulates the audience and is likely to make them rich. Bender becomes a TV star by doing the things he loves - smoking, drinking and stealing. Cubert, Dwight and even Tinny Tim embrace their new role model at once and imitate everything they see him do on TV. The Professor and Hermes are appalled and decide to form a protest group, Fathers Against Rude Television a.k.a. F.A.R.T.. Cubert, Dwight and Tim decide to rob Bender in a desperate effort to imitate him without throwing up from drink or cigars.

Act III: "I once put a laugh-track on a sitcom that had no jokes in it!" 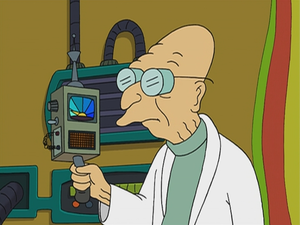 "I'm getting a reading of over 40 Mega Fonzies."

The burglary at Robot Arms Apts. goes as planned, and the three of them throw a huge party for all children they know with the cool stuff they nicked from Bender. The Professor and Hermes crash the party, and Farnsworth finds out with his Cool-O-Meter that Dwight and Cubert are exceptionally cool with all the stuff, and ask where it came from. Cubert and Dwight break down and confess, strengthening their parents resolve to do something against their role model. Bender suddenly emerges from a safe stolen by the boys, where he was apparently sleeping. At first Bender defends himself, but when he finds out the kids stole from him, he immediately does a 180° turn and now says that Bender should not be allowed on TV himself. Logically he joins FART and organizes a march on Hollywood. He wants to quit, but the network does not let him go and forces him to stay by force of arms. The Professor wants to resort to violence to solve the problem, bringing Bender between the fronts. He tricks both armed persons and seizes their guns so he can hold a climatic speech in peace. He states that violence, crime and drug abuse should not be shown to kids, but that a big share of the blame rests with the parents who just can't shut off the TV once in a while. With their differences solved, the crew has learned an important lesson - and congregates in front of the TV to celebrate this fact.

Calculon: [after Bender having auditioned] That was so terrible I think you gave me cancer! I don't care how popular you are, you will never work on my show!
Fry: [outside] Yay Bender!
Leela: [outside] We demand Bender!
Calculon: However you've got the job.

Fry: [watching Everybody Loves Hypnotoad] This show has been going downhill since Season Three.

Bender: Stupid dumb coma. Could have been British.

Leela: As unclean as it makes me feel, I agree with Bender. Kids don't turn rotten just by watching TV.
Fry: Yeah. Give a little credit to our public schools.

Bender: Bender should not be allowed on television!

Professor Farnsworth: Oh, I'm getting a reading of over forty Mega-Fonzies!

Bender: TV would stink if everyone on it was a positive role model.