Cartridge Unit lives in a community of outdated robots who refused to upgrade, instead choosing to live a simpler existence on a little island, free of technology. The speech of this outdated robot, while cartridge dependant, seems situational at times as he was able to call Bender by his name. The selection is always made by Cartridge Unit itself. 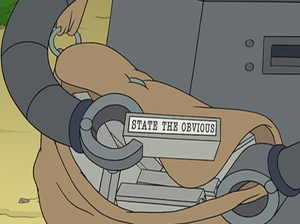