Deathball is a Labyrinth-like game, where each team plays on the maze field while avoiding giant balls that threaten to crush them. The object of the game is to force the balls into specific holes in the map, scoring a point for the team which manages to do so. Logically, the game is set to a timer, and the team with the most points in the end wins. In addition to the players on the field are two commanders who can tilt or even flip the maze in a certain direction (one can tilt it horizontally while the other can vertically). It appears legal for either commander to force the other onto the field; it also appears that if the commander is crushed by a ball or falls in a hole and is crushed, the other team scores a point. 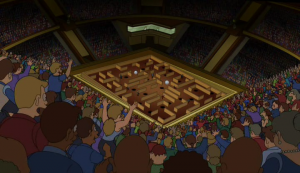 A game of Deathball.

Science professors, namely Farnsworth and Wernstrom, tend to challenge each other to Deathball matches to settle arguments relating to scientific matters.