Global warming is the world-wide steady heating of the planet Earth (or perhaps any other planet subject to the same conditions). Even on Futurama has this crisis made its appearance. 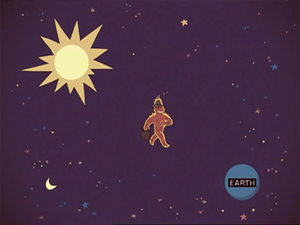 Mr Sunbeam on his way to planet Earth.

The first mention of the global warming occured in "A Big Piece of Garbage" when the mayor listed it as a scientific fraud.

However, according to Turanga Leela in "Xmas Story", global warming was cancelled out by nuclear winter. Which exact nuclear winter we are talking about is unknown, but it may lead to the assumption that some nuclear war may have had erupted (in "The Luck of the Fryrish" Leela states that "you guys never had a single nuclear war", which implies that while there hadn't been one back then, there had been nuclear wars since).

However, this sentiment might just be a cover up for the real solution or perhaps a misconception. Global warming was beginning to take a serious toll on the heat of Earth in the late 21st century, so ever since 2063, the people of Earth have been dropping a large chunk of ice in the ocean every now and then, to put off the effects of global warming.

Though, since the greenhouse gasses are building up, it takes more and more ice each time. Despite not actually solving the problem, politicians deemed the solution efficient enough to be called an actual solution to the problem once and for all. 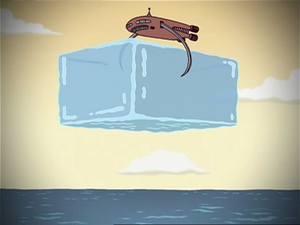 A giant clunk of ice in the oceans every now and then.

It was not until Halley's Comet, Earth's foremost source of ice, ran dry of ice in 3003. After the unsuccessful attempt to obtain the ice, Earth was hit by "sudden intense global warming", an obvious effect of just having put it off for years.

At an emergency conference in Kyoto, Japan, hosted by Al Gore's head, scientists from all around the world was invited to come up with better solutions than the ice cube one to fix global warming. Dr. Ogden Wernstrom attempted with a giant mirror reflecting 40% of the sun's rays, thus cooling the planet. Unfortunately, the mirror fell victim to the fact that space is filled with garbage and rocks, and as such a small meteor knocked it out of bounds, and turned it into a giant reflector glass, which destroyed property and people on Earth.

Given Wernstrom's failure, Professor Hubert J. Farnsworth was also offered with the opportunity. However, he had a much more sinister revelation to present. During his second time at Mom's Friendly Robot Company, he designed an early model of the modern robots. Unfortunately, he had to sacrifice fuel efficiency to succeed. And all robots today on Earth originates from this design. 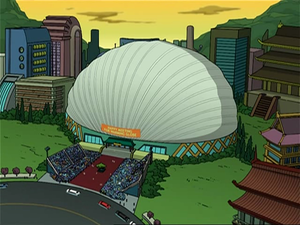 As a result, Farnsworth blames the robots alone for the sudden intense global warming. One may assume that other problems related to global warming, such as a fuel for cars, factories and so on, had been fixed early on (something such as the fact that New New York had been garbage free for 800 years may be an indicator of the commitments of the future), and only new problems arose later to keep the fear of global warming very real.

Wernstrom calls for the immediate destruction of all robots, and he gets the participants at the conference to agree with his plan. Richard Nixon, Earth president, agrees to Wernstrom's plan, and arrange that all robots are gathered to a "party" on the Galápagos Islands. For here, Wernstrom and Nixon will be capable of using the modified mirror to send a giant beam towards the robots and destroying them all at once.

Bender is the only robot who knows what Nixon is planning, but decides to go to save turtles. But, at what is being falsely labelled as a party to lure the robots, Farnsworth, along with his crew, arrives to specify a plan to fix global warming permanently, and without destroying all the robots. Using the entire force of the robots' exhaust vents, they are able to move the Earth's orbit further from the sun, thus allowing to be hit by a lesser dose of sun rays, and in the long run cooling the Earth.

Given Earth's now further orbit, the year was extended by an entire week, which Nixon afterwards declared as official robot party week. And for Farnsworth's efforts, he was awarded the Polluting Medal of Pollution.

It remains to be seen if global warming ever arises again in the future. Or if they really fixed it once and for all.