This page lists articles that were featured on the Main Page during 2010. If you have ideas for pages that should be featured, please add them on the nominations page.

The Series Has Landed was the second episode created for the first production season of Futurama. It introduced the new crew of Planet Express to the rest of their co-workers and featured their first delivery. The crew, along with Amy, head to the moon to deliver a crate to Luna Park where Fry gets his first visit to another astronomical body and heads out to search for the original moon landing site with Leela. Meanwhile, Bender is kicked out of the park and Amy loses the keys to the ship. (more...)

The Farnsworth Parabox is the sixty ninth episode of Futurama and fifteenth of the fourth production season. In this episode; the staff of Planet Express find themselves transported to a bizarre, slightly different universe where coin-flip decisions have the opposite outcome. Farnsworth and his parallel self, having simultaneously performed the same crazy experiment, have created boxes containing each others universes. Before our crew can dispose of their box in the sun they wind up trapped in the other universe and have to chase Zoidberg and his blue counterpart across the multiple universes in order to save themselves and the other universe. (more...)

The opening sequence of Futurama follows the Planet Express ship as it flies through the New New York skyline, where we see various vehicles, buildings, people in the Tube System and advertisements. The start and end of the sequence each feature sections that change in each episode; a title caption and cartoon clip respectively. The music used in the theme, composed by Christopher Tyng, features instruments rarely used on television. (more...)

The Day the Earth Stood Stupid is the thirty-ninth episode of Futurama and the seventh of the third season. As a swarm of deadly brains fly through space towards Earth, the inhabitants are blissfully unaware, attending a pet show where Nibbler is declared "dumbest pet in show". This is proven incorrect shortly after Hermes points out a pattern of destruction leading straight to Earth. Nibbler rescues Leela from the brains as he leaves the planet to meet with his people, who proceed to explain that the only hope for the universe lies in Fry's superior, yet inferior mind. (more...)

"Parasites Lost" is the thirty-fourth episode of Futurama and the second of the third season. When the crew visits a truck stop on their way home from a delivery to refuel the ship and Bender, Fry stops by the men's room where he picks up an egg salad sandwich from the dispenser. Later, while fixing the boiler, Fry gets a lead pipe through his body, which is mysteriously cut through from inside before his body repairs itself. When the staff discover a city in his colon during Zoidberg's examination, they mount a mission to remove the worms, but Leela begins to fall for the new Fry. (more...) 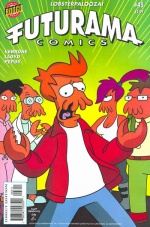 "Anthology of Interest II" is the forty-fifth issue of the Futurama comic series. Much like the episode of the same name, this issue prominently features the What-If Machine. Unlike its counterpart, the issue features not three, but six scenarios. By the third scenario, the machine has begun to malfunction, inserting elements of previous scenarios. As the stories continue to unravel into each other, the Planet Express crew become aware of the fact that they are within the jumbled mess of scenarios and things start to get dangerous. Luckily for Hermes, he is safe in the conference room. (more...)

The League of Robots is a secret society of robots whose motto is "Kill all Humans". While the group may have originally worked towards this goal, they haven't killed any humans in 800 years. More recently, the league's time is mostly spent blathering whilst sitting by the fireplace drinking a variety of alcoholic beverages. Despite the group's former lack of action, they were the subject of a television program aimed at robot children, which is most likely what inspired Bender to join and change their methods. (more...)

"The Deep South" is the 25th episode of Futurama, which was produced for the 2nd season. When Hermes attempts to requisition a pet licence for Nibbler, he is instead sent a mandatory fishing license. As a result, the crew go fishing. Soon a Colossal-Mouth Bass is hooked by Bender and it pulls the ship to the bottom of the ocean, where they discover a long lost city inhabited by Merfolk. (more...) 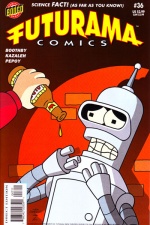 "You Don't Wanna Know Jak!" is the 36th issue of Futurama Comics. While the crew are on a delivery to New England, a planet populated by English robots, Bender sets out to solve a mysterious string of deletions of fembots' memories. Meanwhile, back on Earth, Hermes, Amy and Zoidberg set out on an adventure of their own. After being found exploring the sewers, the mutants send them to the sub-sewers where they meet a freakish race of sub-mutants. (more...)

An Easter egg on a DVD or Blu-ray is a special feature that has been hidden somewhere amongst the disc's contents, usually within the menus. The majority of Futurama's releases have Easter eggs, although these are often a single image, the crew have also hidden table readings of episodes, specially recorded videos and large quantities of unused title captions. (more...) 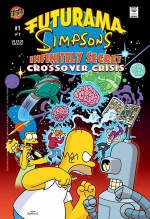 "Somewhere Over the Brain-bow!" is the first issue of the Futurama Simpsons Infinitely Secret Crossover Crisis, a two issue crossover between the Futurama and Simpsons comic series, which later had a two issue sequel. This issue sees the Planet Express staff's minds being trapped in an old Simpsons comic by the Brainspawn, there they all develop amnesia and wander off leaving it up to Fry and Nibbler to find everyone and figure out how to get out of the comic before its story ends and they are trapped forever. (more...) 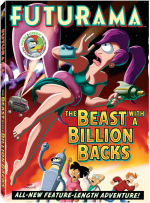 "The Beast with a Billion Backs" is the second film from the fifth production season of Futurama. The film follows on from the events of the previous film, which saw the creation of a rift in the space-time continuum a short distance from the Earth. The Earthicans launch a failed investigation, headed by Professor Farnsworth, followed by a failed attack lead by General Brannigan. However they are soon greeted the being that dwells beyond the anomaly. In the meantime, Fry finds a girlfriend while Amy and Kif take their relationship to the next level. (more...)

The Fry-Leela relationship is a recurring theme and a story arc in Futurama, the developing romantic relationship between Philip J. Fry and Turanga Leela. Starting early in the pilot with Fry showing a physical attraction to Leela but being turned off by her monstrous eye, the theme is seen in most episodes and is the center of a grande number of episodes both from the original and second run, including "Time Keeps on Slippin'", "The Sting", "The Devil's Hands Are Idle Playthings", "Into the Wild Green Yonder", "Rebirth" and "The Late Philip J. Fry". Though at first a one-sided affection, with Leela showing little care for Fry as anything but a friend, her subconcious feelings are revealed in "The Sting", in which she believes Fry has died, and their kiss by the ending of "Into the Wild Green Yonder" as well as the subsequent "Rebirth" settles their less windy relationship of the sixth season. (more...)

"A Flight to Remember" is the tenth episode of Futurama, and the first episode of the second broadcast season, making it the first episode to be aired in a different season than intended. The plot is largely a parody of the 1997 film Titanic, and features the Planet Express crew on vacation in the luxury spacecraft Titanic, piloted by Zapp Brannigan. The episode is most important for starting the relationship between Kif Kroker and Amy Wong, and is regarded as one of the best episodes of the first season. (more...) New New York is a major city in the United States and the primary setting of Futurama. New New York is the reincarnation of the former New York City, remnants of which can still be found underground. In the year 3000, the name of the city of New York City has been changed to New New York when rebuilt after one of Earth's periods of alien invasions. The city has seen some changes since the 21st century, including the subways being replaced with a tube transport network, and ethnic neighborhoods like China Town and Little Italy have been joined by Little Neptune. But in many ways it has not changed much in 1000 years: locals are still rude, public transportation is over-crowded, and it is a place where many cultures, Earthican and Alien, mingle. (more...)

Time travel has become a recurring theme in Futurama. Time travel is defined as any movement through time, but is much more interesting when the travel isn't just someone progressing through time at the normal rate while remaining conscious. Eliminating just one of these factors can make all the difference; Adoy's Time Tunneller and Fry's initial journey to the future in a cryogenics lab are respective examples of these. Despite the fact time travel has now appeared in several episodes, a film, the game and a number of comics, Groening and Cohen had initially intended to avoid the use of time travel. (more...)

As anyone on a Futurama message board or news site between July and August of 2009 would be painfully aware, 20th Century Fox Television and the show's cast became locked in a dispute about a sixth season pay rise that saw the company use a recasting ploy in an attempt to get their way. While deals were eventually struck with the entire cast, during that time there was a lot of speculation among fans about why the cast was possibly being replaced and discussions about whether the series would, or even should, return without them. The timing of this event led to the cast's removal from a Comic-Con panel discussion, a decision that left fans with even more questions.

Professor Hubert J. Farnsworth is the founder and CEO of Planet Express. Farnsworth was born way back in 2841, he soon developed into a greasy teenager and by his 30s he had become a scientist and inventor. Over the years, the Professor has had an on again off again relationship with Mom and a hundred year feud with fellow scientist Dr. Ogden Wernstrom. By 2999, his family had been reduced to just himself and an incomplete clone. At the end of the year he learned that his great uncle was alive after having been frozen for a thousand years and almost ten years later, he found out that had a son. While Hubert's eyes, ears and internal organs have begun to fail him, the Professor retains the fiery passion of youth.

Music plays an important role in setting the tone of a scene, and while original compositions by the regular artist Christopher Tyng, will often suffice, there are times when popular music will improve the scene even more. In Futurama, there are many popular music appearances as well as original performances by the characters. Whether played in the background, over a montage or sung by a trio of aliens; the choice of which track to use can be critical. (more...)

"Where No Fan Has Gone Before" is the sixty-fifth episode of Futurama, and it guest stars William Shatner, Leonard Nimoy, Walter Koenig, George Takei and Nichelle Nichols as themselves, as well as Jonathan Frakes as himself in a jar. Fry discovers that Star Trek has become forbidden to even mention, and the Planet Express crew together, with Leonard Nimoy, sets off on a journey to find the Star Trek cast. The episode is famously having many references and parodies on Star Trek, as well as guest starring a large portion of its original cast. (more...)