Not to be confused with Dr. Ben Beeler.

Keeler was previously a writer for The Simpsons, and he has written many songs for both shows. One of his most notorious Simpsons episodes was season nine's "The Principal and the Pauper", which is heavily despised by fans for rewriting Principal Skinner as a phony who assumed another man's identity. He has won two Emmy awards for The Simpsons, and two WGA Awards for the Futurama episodes "Godfellas" and "The Prisoner of Benda".

A character in the series, Ben Beeler, is loosely based on Keeler. 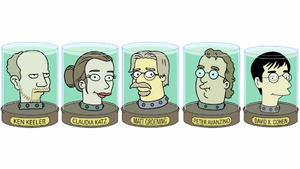 Keeler has a history of writing the assumed series finales: he wrote the finale of the original run, "The Devil's Hands Are Idle Playthings", when the writing team knew that the show was to be cancelled. After the show was picked up for four additional movies, Keeler also wrote the fourth and final of them, Into the Wild Green Yonder, which was also assumed to be the final TV media of the series. Before season 7 was announced in 2011, Keeler also wrote "Overclockwise", the finale of the sixth season, which was yet again possibly the final episode. All of these episodes were designed to suit as possible final episodes of the series.

The last episode of season 7, "Meanwhile", which is the actual finale, was written by Keeler as well.

As the nerdy writer

Keeler has a Ph D in Applied Mathematics, which has helped him write several of the nerdier jokes on the show, for example the several jokes concerning 1729. For the episode "The Prisoner of Benda", Keeler wrote a complete mathematical theorem in the area of group theory which was used in the episode by the Globetrotters and the Professor to save the day.