Malfunctioning Eddie owns a car dealership which is based on Crazy Eddie's consumer electronic store from the 1980s, which had notably similar advertisements. He tends to break or explode when in shock or excitement especially when someone is willing to pay a large price on a car. He was later committed to HAL Institute when his prices were determined to actually be insane. While there he started to randomly explode until he was about to be released where he was able to barely explode at all. However he later made larger explosions again in "Crimes of the Hot". 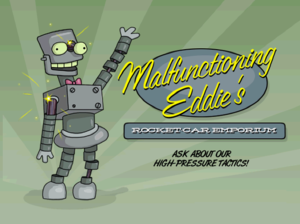 Victor: The doctor says you are making great strides with your exploding problem.
Malfunctioning Eddie: Well the way I see it-- [explodes]