The probulator is a device at the Applied Cryogenics lab to examine newly awakened defrostees. Exactly how the device works or what it does remains somewhat ambiguous, as every time we see it, the camera is always elsewhere when the action takes place. The machine certainly does not identify or resolve diseases, as both the common cold and boneitis remained unresolved despite the carrier's examination with the probulator.

Before being examined, the subject must take off his or her clothing before lying on the table, though they may hover slightly over the table. The machine is then operated by the Fate Assignment Officer.

The probulator is apparently also capable of satisfying other robots in a very pleasing manner, or at least Bender claims it "knows how to please a man".[2ACV19] However, its use in humans has always proven to be extremely painful. 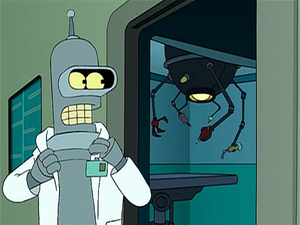 Bender together with the probulator during his employment at Applied Cryogenics.

In "Space Pilot 3000", it was originally intended for a much longer scene with Fry on the probulator, where after inserting a tube into his ears, and filling his head with liquid, would cause flashbacks to be shown to the viewer, and assumingly the Fate Assignment Officer, or Leela in this case.[1][2]