From The Infosphere, the Futurama Wiki
(Redirected from The Neutral Planet)
Jump to: navigation, search

The Neutral Planet is a planet in the Neutral Zone. It is the homeworld of the Neutral People, who are led by the Neutral President. The planet's colour is consistently grey and its capital is Neutropolis.

Zapp Brannigan was scheduled for the ribbon cutting, but after having suspected Turanga Leela of being neutral, a group of people which he despises, he decided to use the Nimbus' laser instead. As a result of his clumsiness, the new DOOP headquarters blew up. 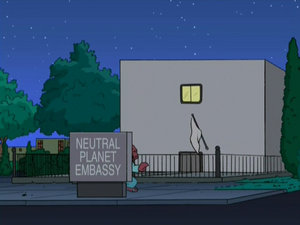 Zapp: I hate these filthy Neutrals, Kif. With enemies you know where they stand but with Neutrals, who knows? It sickens me.

Neutral President: If I don't survive, tell my wife 'Hello.'

Neutral President: All I know is, my gut says maybe.