The Neutral People are humanoids of average height and build. They are hairless, their skin is a dull grey, and their faces are not capable of displaying emotions. In fact, it's not entirely clear if they have emotions at all.

The Neutral People originate from the Neutral Planet and are lead by the Neutral President. Their motto is "Live free or don't", aspiring to their neutral position on any subject.

The Neutral People are despised by DOOP captain, 25-star general, Zapp Brannigan, of Earth. Brannigan argues that with enemies you have knowledge of their position, but neutral people's position is completely unbiased.

In 3000, Brannigan began his campaign against the Neutral People, after having obtained control of the Planet Express ship, he orders it to crash into the Neutral capital of Neutropolis, in order to cause an explosion from which no living thing can escape. Fortunately, the Planet Express crew manages to divert the ship. Brannigan's position on the neutrals probably remains the same, but he has yet to challenge them again. 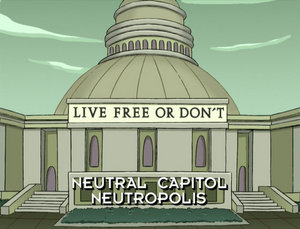 Neutral President: I have no strong feelings one way or the other.

Neutral President: All I know is my gut says maybe.

Neutral President: If I don't survive, tell my wife, "Hello."

President's Aide: Your Neutralness, it's a beige alert.

Zapp: What makes a man turn neutral? Lust for gold? Power? Or were you just born with a heart full of neutrality?