Difference between revisions of "Simpsorama"

"Simpsorama" is an upcoming episode of The Simpsons the story of which features the characters of Futurama. It was announced on 20 July 2013, at Comic-Con, by Simpsons executive producer Al Jean.

The episode was written by Futurama and Simpsons writer J. Stewart Burns. It was initially scheduled to be recorded in August 2013, [1] but it appears to have actually been recorded in September. [3] It will air on Fox, as the season-25 finale, in May 2014. [1] [2]

Bart Simpson does something that affects the future in a really bad way, so Bender travels back in time to kill him. [1]

Al Jean said of the episode:

On 19 September 2013, John DiMaggio posted a picture of the episode's production script on his Twitter page, [4] revealing the episode's title.

On 17 December, David X. Cohen said that the episode was being animated. [5] 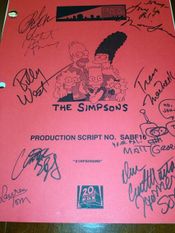 A picture of the episode's production script, posted by John DiMaggio on his Twitter page. [4] It is signed by, among others, Billy West, Tress MacNeille, Lauren Tom, and Matt Groening.