Snooty House (alternatively, Snϴϴty Hϴuse) is a fraternity at Mars University, and can also be used to collectively describe the members within. They're very pretentious, and look down upon most of the other students at the university, specifically the Robot House. They partake in the Big Fraternity Raft Regatta, but lose at the very last moment to Robot House and proceed to topple into the water. 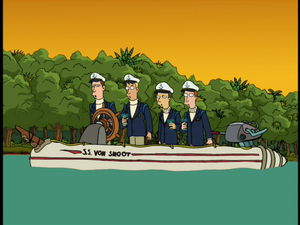 Chet: I say! You've damaged our servants quarters. And our servants.
Meidermeyer: This time, Robot House has gone too far!

Chet: I say, Robot House, your water craft is as ill-designed as you yourselves.
Meidermeyer: Good one, Chet! [laughs]